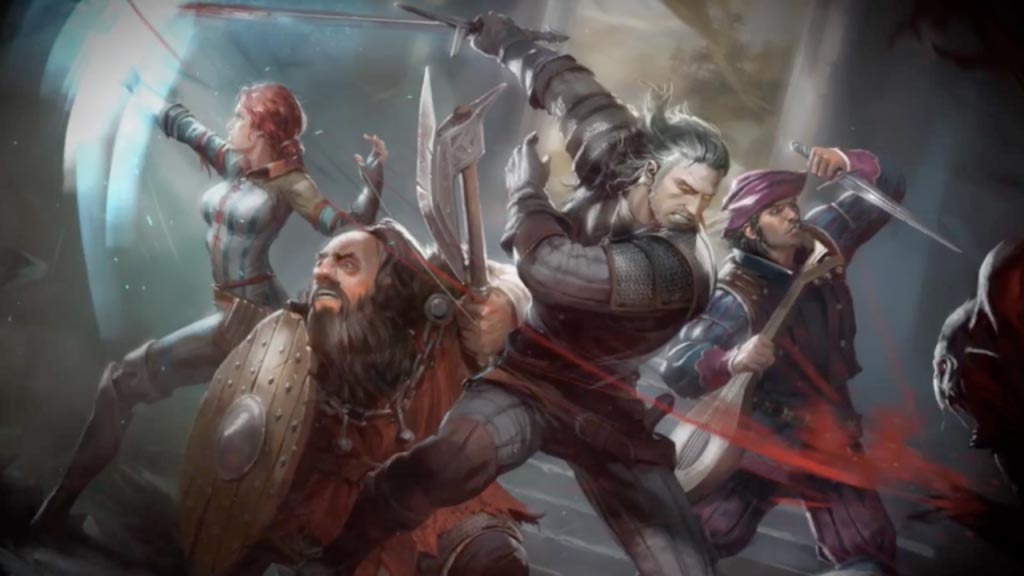 With The Witcher 3: The Wild Hunt not due to release until February 24th 2015, what’s a Witcher fan to do?

CD Projekt Red and Fantasy Flight Games have an answer with The Witcher Adventure Game, a table-top gaming experience that will be hitting store shelves sometime this fall. Renowned for their high-quality board and card games, Fantasy Flight Games turned to designer Ignancy Trzewiczek, the mind behind several popular games such as Robinson Crusoe: Adventure on the Cursed Island and 51st State, in order to bring the vibrant world of The Witcher to life in a new format. 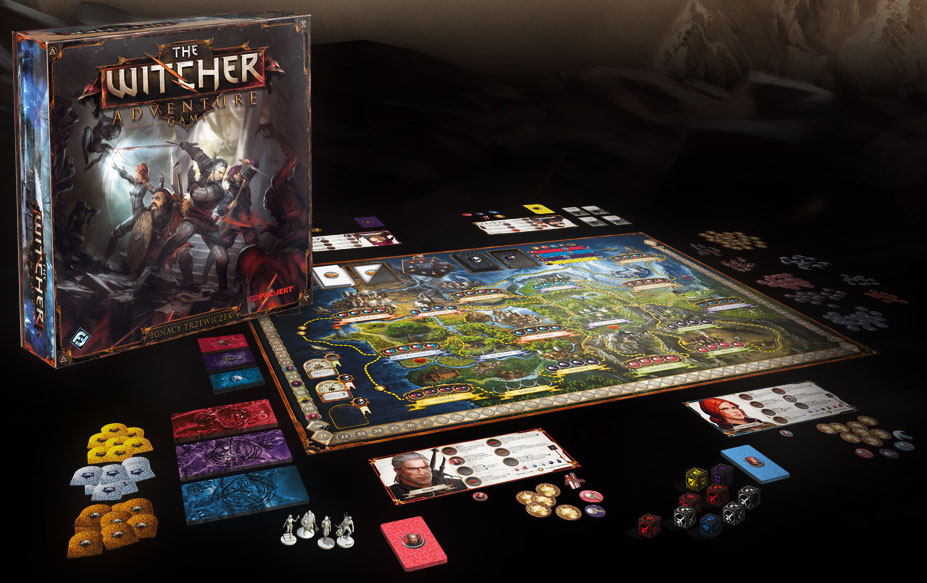 As a board-gaming enthusiast and fan of The Witcher, I was very excited to get a hands-on demo of the digital version (PC/Mac and iOS) at this year’s E3. Assuming the role of one of four characters: Geralt of Rivia, Triss Merigold, Yarpen Zigrin, or Dandelion, players take turns traversing throughout the Northern Kingdoms in search of  resources that will help them complete quests and earn victory points, which are totaled at the game’s end in order to determine the winner. Each turn players can perform up to four actions from a pool of five: Travel, Investigate, Develop, Rest, or a unique action specific to each character.

Travel moves the players token along the roads of the game board from city to city, which contain different types of clues that players can seek after in order to complete their quests.

Investigate allows the player to reveal the top card of the ‘investigation deck’ and resolve its effects, which can present new opportunities to earn gold, clue tokens, and other beneficial cards–provided the player can complete their requirements.

The Witcher Adventure Game is a role-playing board game and as such the Develop action allows players to draw from a deck that grants new abilities and upgrades to their characters. Each time the action is selected, the player chooses to keep one of two enhancements that build on one another. As a result, adopting a specific build, such as increasing Geralt’s potion, enhances his in-game potential. There are several different options available to each character, which offer a lot of replay value for frequent players of the game. 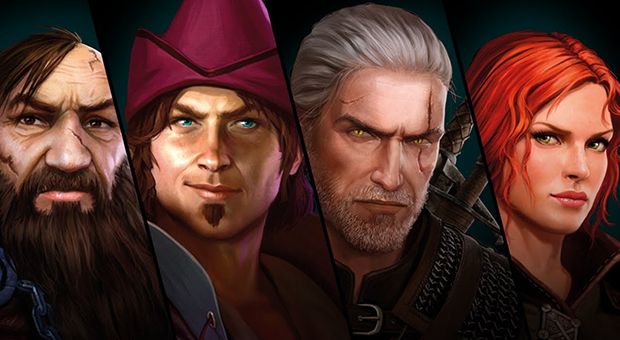 As the characters traverse through the world, monsters and unfortunate events can cause injuries to the player that hinder or prevent their abilities and actions. Therefore, the Rest action allows players to slowly recoup any damage that they sustain. However, should the player receive enough damage in the form of skull tokens on their character’s card that they can’t perform any actions, they’re out of the game entirely. There’s no second chances in The Witcher Adventure Game, which reflects the harsh and deadly world in the games.

Lastly, each player is able to able to perform an action unique to their character. Dandelion the Bard, for example, can spend an action to sing at a town to earn extra gold, a precious commodity that usually requires players to put themselves at risk of injury. Another example is Geralt’s ability to brew, which allows him to make use of the potion Development cards.

Each character is also specialized to excel in a single aspect of the game’s challenge categories. Take Geralt of Rivia: a warrior and veteran monster hunter who disdains politics. As such, he is much more capable of completing combat-oriented challenges and quests. Dandelion in comparison is a singer, poet; ill-suited for physical challenges. But, he excels in bribery and politics, which makes him the best-suited for challenges and quests that require guile.

Challenges can come in a variety of forms such as wandering monsters or investigation cards and are resolved using colored dice; the challenge difficulty determines the number of successes required to pass. Each player rolls two white dice, up to an extra one or two colored dice corresponding to the challenge category, and any bonuses offered by cards or developments. Failure is often met with injury or loss of clue tokens, which are a vital commodity necessary to complete quests.

Clue tokens, a hallmark of Fantasy Flight games, are composed into the same categories as the challenges: combat, magic, diplomacy, and politics. They are earned via investigation cards and spent with character-specific exchange rates in order to gain a quest counter. The exchange rates are very important, as each character’s specialty costs significantly less than the categories that they are less-suited for. For example, Geralt needs three combat clue tokens in order to receive a combat quest counter. However, he would have to spend seven politics tokens to earn a politics quest counter, a significant mark-up. Each quest card displays the number and type of quest counters needed in order complete it and earn victory points.

As players seek to complete their quests in The Witcher Adventure Game, they can choose to collaborate with other players to further their own agenda, introducing the most intriguing aspect of the game. This allows players to trade clue tokens with each other, lend each other bonuses to challenges, or renege on an agreement as they try to gain the upper-hand. The game, however difficult, can only have one winner. Therefore it behooves players to think twice before asking for or offering assistance, as they may unknowingly secure their opponent’s victory. 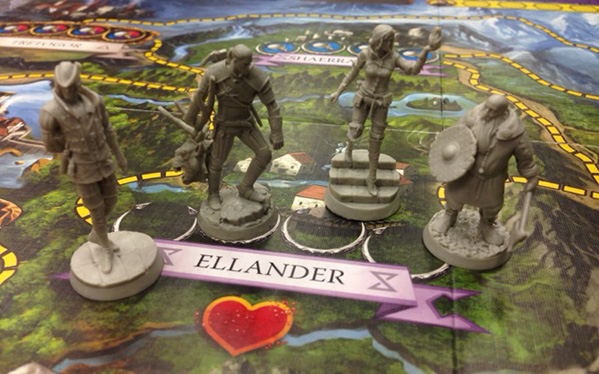 Overall, I was impressed with the gameplay of The Witcher Adventure Game as it blends mechanics from other good table-tops such as the four-action system from Pandemic, investigation and travel from Arkham Horror, and development from Twilight Imperium into a fun and true-to-lore board game.

I was also impressed by the aesthetic of the game itself, it looks gorgeous. As a publisher known for its quality visuals, Fantasy Flight Games delivers with highly detailed plastic models of the four characters, durable tokens, and a large board with rich colors. The marrying of solid game mechanics and art style is a rare treat in the board-gaming world, as a publisher usually focuses on only of the two aspects in order to compensate for costs. But by partnering with a publishing giant like Fantasy Flight, CD Projekt Red was able to do the series justice and introduce The Witcher to fans in a new medium.

While we are forced to wait until February to witness the closing of Geralt of Rivia’s saga, we can fill the void with The Witcher Adventure Game, releasing this fall on store shelves, PC/Mac, Android, and iOS.