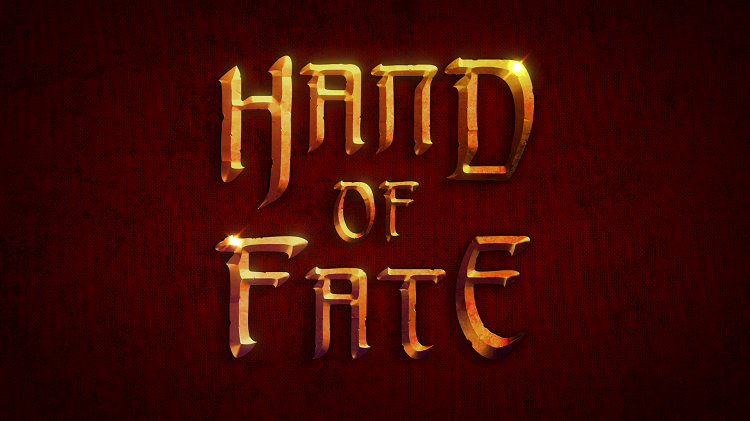 I’m not ashamed to say that I am a total nerd when it comes to TCGs and collectible card games. Pokemon, Magic the Gathering, Yu-Gi-Oh — I’ve played all of the big-name contenders and even ventured out to collect some of the more obscure TCG releases. Because of this, I’m a sucker for any type of game that uses card-based gameplay or mechanics. I’ve been through all the traditional ports, like Pokemon TCG Online, and each digitalized version of Magic the Gathering that comes out. But I felt like I was playing the same games over and over, although there wasn’t anything wrong with that, since I enjoyed them so much. However, it wasn’t until I picked up Hand of Fate that I realized that deck building and card-based games can be much more than they already are.

Hand of Fate isn’t a new release; in fact, it has been out for over five years now. I’ll admit I wasn’t aware of its presence since I’d been spending so much time on other releases, and I suppose you could call Hand of Fate an Indie release. One thing is for sure, I’m very glad that I stumbled across this release. Hand of Fate manages to seamlessly blend together some of the best elements from deck building games and traditional hack-and-slash RPGs. It’s important to note that this release is very unique, and cards are used in a pretty non-traditional way. Instead of using cards to combat enemies and grow stronger, you’ll be building decks to challenge yourself, constantly adding new places to explore and enemies to destroy. Hand of Fate sees you interact with a card master, one who will deal you a series of cards that will shape adventures for you in real time. As you venture through a “dungeon,” the card master will deal you new cards from your created deck. These cards include a variety of things and rage from enemies, to games of chance, to epic boss battles. Once you receive your cards you’re instantly transported into a third-person view where you must hack-and-slash your way to victory.

As you progress through each journey, you’ll unlock even more cards to add to your deck. It’s pretty entertaining once you realize that each card you unlock is a potential for greater difficulty. Any of you out there who are gluttons for punishment will love the fact that Hand of Fate rewards you with greater boss variety and enemies to conquer. It’s a very smart way to handle progression, while keeping things interesting for the player. Because of this “random draw” style of dungeon creation, you’ll rarely find yourself experiencing the same adventure twice. The one downside is that there isn’t much character customization or development. This can cause combat sequences to become a bit stale, but thankfully you have some interesting mechanics to play with. Some enemies require you to dodge, while others will require a timed counter-attack, which can cause for quite a difficulty spike when dealing with a small horde of baddies. It’s also important to note that you can only engage enemies in a one-on-one scenario, so you won’t be able to clear masses of creatures in a single swipe. Combat requires as much wit and tactic as it does hack-and-slash finesse. Character development would be a very nice addition to this release, and although it hasn’t happened yet, the creative minds behind Hand of Fate are very active in listening to the community and implementing their ideas.

So far, Hand of Fate has had a ton of content added to the core game. Since its release, Defiant Development has added four separate free DLC packages. These additions turn Hand of Fate into an expansive world that has you hacking, slashing, ducking, and dodging across a variety of locations. You’ll see new bosses and enemies, and of course have tons of new cards to unlock and add to your deck. Anyone who hasn’t played Hand of Fate yet is in for a real treat, since all of the DLC is readily available to you. You’ll find yourself inundated with things to do, and the game should feel pretty massive. The card master himself adds an entertaining layer of conversation to the mix. Defiant Development did a fantastic job of creating a character that loves to egg you on, and one you will immediately identify as an enemy. But the card master isn’t an individual with ill intent and is instead a well-crafted character with much to say and an interesting backstory to learn.

Hand of Fate is a must-play, and I don’t just say that because I love card-based games. It’s unique, and a very interesting spin on two tireless genres. There is so much fun to be had with this title, and the fact that Defiant Development spends so much time tweaking and adding content is just a cherry on top. You can grab Hand of Fate right now on Steam, PS4, and Xbox One. Those of you looking for more information regarding this release can check out the dedicated website here. Hopefully Defiant Development will continue to crank out content for this release, and we will perhaps see an upgraded sequel sometime in the near future.