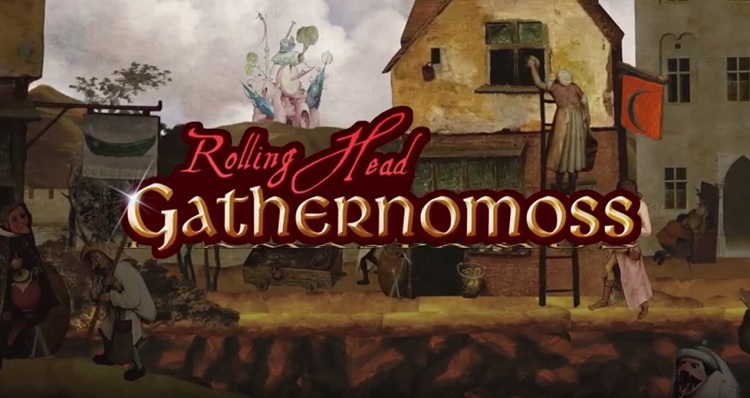 They say that a rolling stone gathers no moss, and apparently the same can be said for a rolling head. This is the premise for a rather unique upcoming adventure from developer Adrien Poncet. The world of classical art has been infiltrated by a rather grotesque “hero.” A disembodied head rolls effortlessly through the countryside, flinging itself into the air and screeching a low-key monotone battle cry. It sounds like something right out of a B-rated horror movie, but Gathernomoss features more unique comedy than it does anything scary.

The game itself looks like something cut straight from Monty Python, which works quite well alongside the zany gameplay. Classical art and paintings of landscapes litter the backdrop of each level, scrolling slowly sideways as the character progresses. The foreground is filled with all manner of artistry, from renaissance-themed individuals to realistically painted objects. You’ll careen your way through a series of different environments including the countryside, towns, docks, and even castles. Visually, Gathernomoss is a true work of art, no pun intended. It’s unique, developed well, and hilariously animated. The developer has done a fantastic job bringing a project to the market that visually separates itself from the rest of the pack. 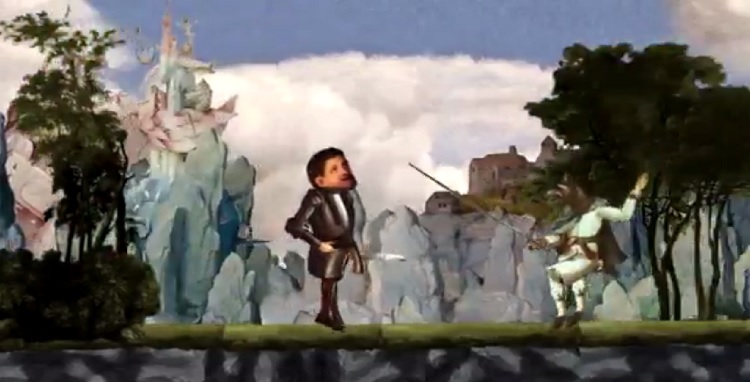 Gathernomoss is a platformer at its core. One would think that a bodiless head would have a rather hard time moving on its own, let alone navigating a complex series of platforms and pits. Thankfully, this is not the case in Gathernomoss. Our heady hero has no issue getting around and you’ll find yourself gathering great speed as you tumble along the ground and launch yourself into the air. This isn’t a simple Sunday stroll, either — there is a lot to be weary of in this oil-based world. Enemies will do everything in their power to stop you from completing your noble quest, and you’ll need to use all of your cranial cleverness to thwart your foes. You can incapacitate certain baddies by throwing yourself head-first into them. You can also “possess” enemies by striking them with a precision attack. If successful, you’ll “pop” your foe’s head, leaving their body without a pilot. Jumping onto a headless body will allow you to use it, and a variety of different bodies possess different skills. Taking over the body of a guard, for example, will give you access to their arsenal of weapons.

This upcoming release is currently slotted for 2017, but the developer hasn’t honed in on a specific release date. We don’t yet know what to expect in terms of story, but we do know that Gathernomoss is filled with hilarious sound effects, gameplay moments, and animations. From the announcement trailer, it appears as if there are many gameplay tweaks scattered throughout the adventure. You’ll find yourself facing off against bosses, flinging yourself via catapult, and rolling down massive hills like a bowling ball. The first impression that Gathernomoss makes in terms of wild visuals is accentuated by its over-the-top gameplay elements.

We’re very excited to get our hands on this upcoming release, and it’s easily one of the more imaginative things we’ve seen in recent months. If you’re interested in getting more information about Gathernomoss, you can follow developer Adrien Poncet on Twitter.