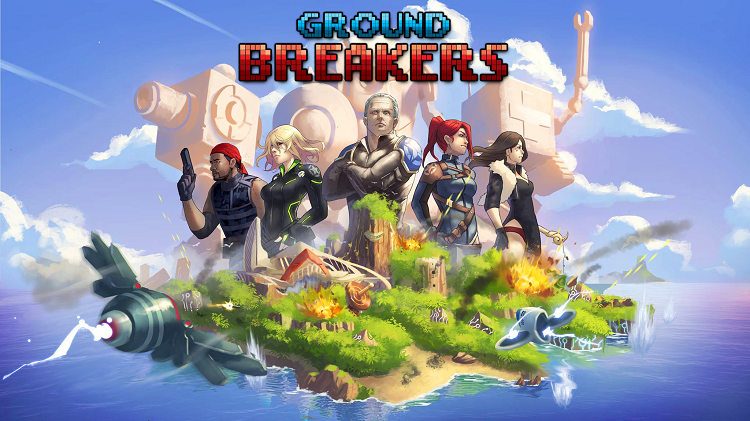 I love turn-based strategy games. There is something very rewarding about conquering an opponent through tactic, rather than sheer force. Thankfully, there have been quite a few releases on this subject. Games like the Total War series, Civilization, Xcom: Enemy Unknown, and Endless Legend have been well-received by the gaming community for their stellar turn-based gameplay. There have been a lot of Indie releases that have attempted to slide into this genre, and most of them have managed to bring solid gameplay elements and unique visuals. There is one recent release, however, that is taking the turn-based strategy formula and attempting to elevate it to the next level. Ground Breakers, a release from developer United Indie, comes packed with strategic robot warfare and a slew of interesting additions that add a unique and creative layer of depth to the title.

Ground Breakers has you vying for world domination through the use of a robotic army. There are currently over 15 different types of robots — with more to come in future updates — each with their own distinct skill-set, strengths, and weaknesses. The partial key to victory is to assemble your team in such a way that you can dominate your enemy upon the battlefield. As you blast through mechanized foes, you’ll find specialized parts that can be used to craft new robot types. These parts are obtained in a completely random fashion, which gives the title a lot more replayability as you find yourself smashing your enemy in search of that one precious part you may need. You can also obtain chips, which range in rarity and strength. These chips can be added to your robots to boost their abilities, or give them better advantages during battle. There is a deep layer of customization here, the type of depth you would usually only find in a rogue-lite or RPG setting.

When you aren’t spending your time upgrading machines or crafting new allies, you’ll want to familiarize yourself with each stage type featured in Ground Breakers. There are currently 5+ battleground types that endlessly morph to keep you on your toes. Certain “blocks” have different elevations, and will give you an advantage or disadvantage depending on where your unit is positioned. There are even “natural” elements to each level that will throw curveballs into the mix and may force you to reassess a certain strategy. This variance in level design helps to showcase a rather entertaining single-player campaign.

The name of the game is world domination, but Ground Breakers won’t hold your hand and help push you towards absolute global leadership. This title features a nifty non-linear storyline which has you battling foes in varying regions across the planet. What makes it even more entertaining is that you won’t be forced to climb the early stage ladder. This means you are free to attack a variety of areas at any given time. There may even be battles in which you are vastly overpowered by your opponent. In most situations, this would seem a bit unfair to a lower level player. But it’s actually quite enthralling to try and topple a powerful adversary, especially when you are given the choice on when and why you want to battle them.

Ground Breakers also comes equipped with a few game modes, and new modes are planned for future releases. In some instances you’ll be forced to guard a specific robot from perishing, and in others it’ll be all about protecting a fort from being demolished. It is also important to note that this release features a play style that doesn’t see robots completely obliterated when they fall in battle. Instead, they are placed into a special repair station on their respective side of the field. This makes the game all the more interesting, as losing a powerful unit only means a small wait time before that unit waltzes back onto the battlefield. Ground Breakers also features an online multiplayer mode, which allows you to battle friends and strangers from all over the globe to tactical robot warfare. Unfortunately, some of these modes aren’t without their flaws, and there are some minor annoyances and bugs that may hinder the fun factor a little. Still, beyond these minor issues (which are actively being fixed for future updates), Ground Breakers offers a vastly entertaining playground for those of you who adore turn-based strategy.

If you’re interested in getting more information regarding Ground Breakers, be sure to check out the dedicated website here. You can grab the release right now on Steam. The low price tag is definitely worth it, as this title should provide you with hours and hours of strategic fun. You can also follow the developer on Twitter, where you can find info about future updates and other upcoming additions to the game.