The world’s #1 (digital) princess is, for the second time, coming to those of us in North America and Europe! It was gratifying to see SEGA’s Hatsune Miku: Project DIVA F 2nd at E3 2014, and my great pleasure to get the chance to play the game itself.

This game will be only the second in the ongoing Project DIVA series to make it to the western market, the first having been the original Project DIVA F, which released on August 27th, 2013 on PSN in the U.S. Its release is not only wonderful news for non-Japanese fans (particularly those of us who can’t afford to import), but also a testament to the passion of those fans: it was an uphill battle to get any Vocaloid game to the western market, and Project DIVA F 2nd almost certainly would never have seen the light of day over here were it not for the outpouring of support from fans, some of whom bought Project DIVA F more than once! Without further ado, let’s take a look at what Vocaloid fans have to look forward to when the game releases in the third quarter of this year.

The Project DIVA games have always been deceptively simple, given that the core of the gameplay is all about pressing the PlayStation device’s buttons in time with the music. Rhythm game fans, even those not familiar with Vocaloid music, will find it easy to adapt to this gameplay. However, what has always been impressive about Project DIVA, and I would argue is increasingly the case in newer versions, is that the game is able to turn such a simple control scheme into something truly challenging. Much like other popular hand-held rhythm games, such as Oendan and Elite Beat Agents, Project DIVA‘s gameplay forces your eyes to track the entire screen, as the note queues fly all over the place. Additionally, the notes you will be playing aren’t drawn just from the song’s predominant beat—background instruments and subtler musical elements also get plenty of attention, so the player must pay close attention and have lightning-fast reflexes at higher difficulty levels.

Project DIVA F 2nd introduces two new note queue icons to the core gameplay to up the level of challenge even more. The double star icon is a star with a “W” in the center, which requires PS Vita players swipe the screen with two fingers, and PlayStation 3 players to flick both analog sticks at the same time. The link star icon requires the player trace the line connecting the stars with either the touchscreen or analog sticks.

At E3, I got the opportunity to play the song “World Is Mine” with these new features, and I have to say, it gets really tough! Learning the new star note functionality is reminiscent of the first time moving up the difficulty to experience the fifth note in Guitar Hero, when suddenly I had to actually move my hand to hit all the notes, and in the meantime, those notes were coming faster than ever before. In fact, this new feature in Project DIVA F 2nd was enough to make me fail the song on the first try, which is pretty impressive considering the fact that there’s no Vocaloid piece I’m more familiar with than “World Is Mine.” I’m certainly no Project DIVA expert—I’ve seen some crazy things in Japanese arcades, so I would hesitate to say that the new notes would prove a challenge for any truly expert-level player—but I think that for the average player, this will add a welcome new level of difficulty.

Aside from the core gameplay, Project DIVA F 2nd will be bringing back other much-loved elements of the franchise. It boasts an exciting track list of 40 songs (pre-DLC), including a bunch of new songs that Vocaloid fans are sure to recognize. Personally, I’m most excited about the beefing up of Luka’s repertoire with the fantastic “Hello, Worker” and “Blackjack,” in addition to the returning favorite “Double Lariat.” The Edit Mode feature will also be returning in this installment, allowing players to create their own videos and even playable pieces using the game’s assets. I did not, unfortunately, get to try this mode at E3, but SEGA’s Aaron Webber promises that it “has seen notable improvements over the first version.” Between the new gameplay elements, improved Edit Mode, and stellar tracklist, there is more than enough reason to purchase Project DIVA F 2nd, even for those who already own the original. 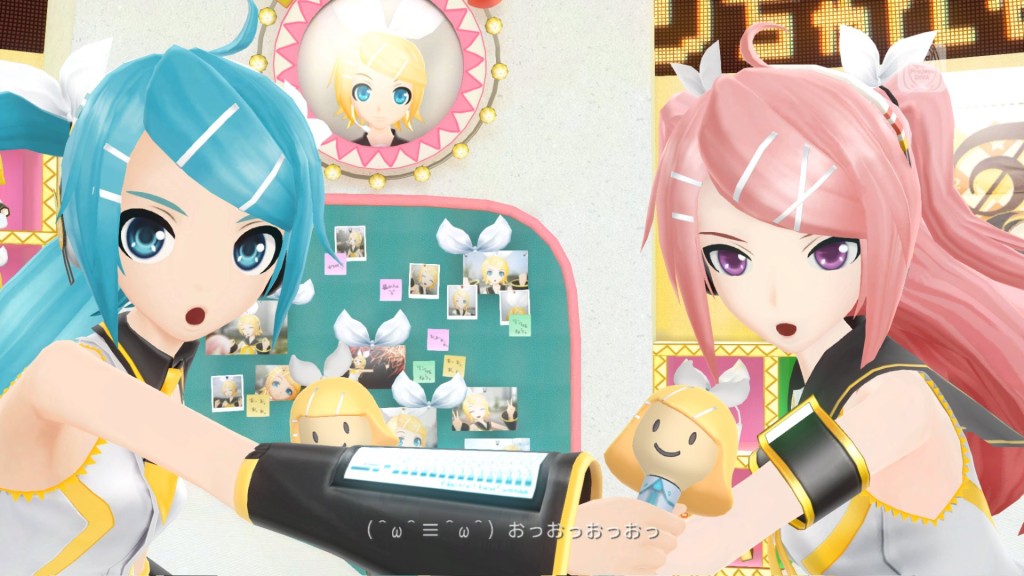