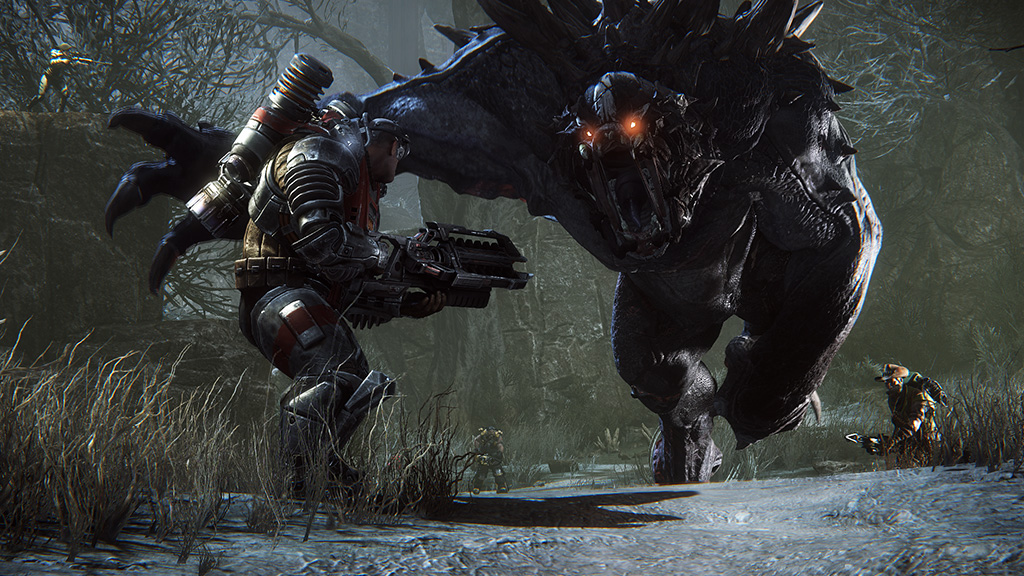 This year at E3 Turtle Rock and 2K, the folks behind the highly successful Left 4 Dead series,  debutted a different kind of competitive multiplayer shooter in which four players are pitted against one: Evolve. 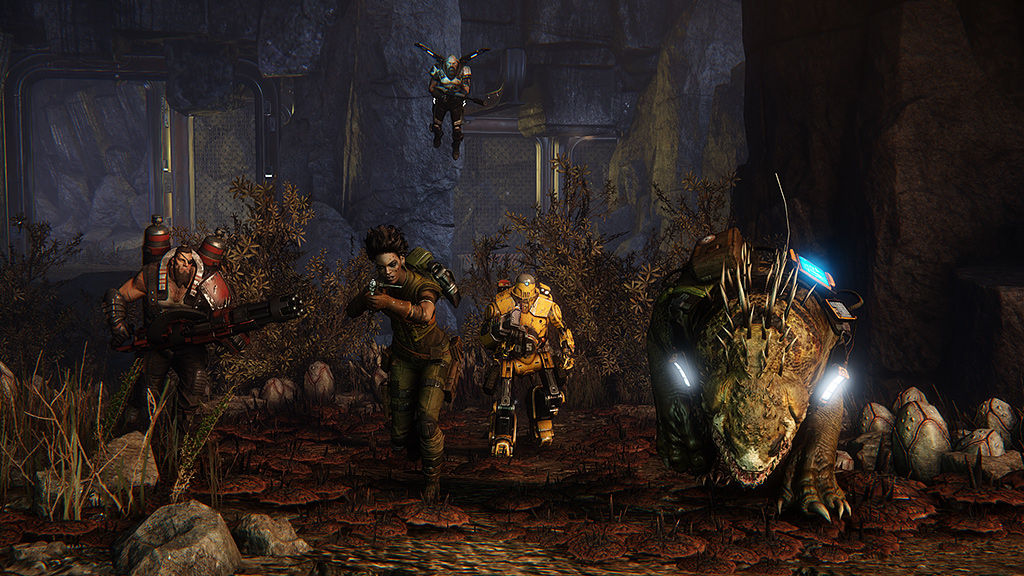 In this title, four players assume the roles of specialized hunters seeking to bring down the apex predators of planet Shear. One other player controls a huge monster that must consume the local flora and fauna and evolve to become an unstoppable force of nature. Victory for the hunters comes in the form of the death of the monster whereas the monster can win by a total party kill or by destroying the hunters’ home base. This dichotomy makes for a unique and intense gaming experience that is poised to offer hours of fun.

The player classes available for play at E3 were team staples: medic (Lazarus) , support (Bucket), assault (Hyde), and trapper (Maggie). Each class featured two weapons and two support abilities that offer a lot of team synergy. For ease of use and gameplay balance, the hunters’ weapons and abilities are essentially infinite with the caveat of cool-downs between uses.

Lazarus, the medic, sports a silenced sniper rifle which allows him to deal modest support damage while remaining hidden to use his healing ability on his team. The medic’s healing ability recovers around 50% of players’ health in a relatively small AOE, making him absolutely vital for the longevity of the team during a protracted monster fight. A clever monster player would naturally attack the medic first, therefore Lazarus also has the nifty second ability of invisibility. Lazarus’ last and most crucial ability is resurrection; bringing back a downed teammate to tip the scales of a losing fight with the monster. Overall, the medic plays the traditional healing role in his team while possessing the ability to keep himself alive by cloaking.

Bucket, a support teammate, is a Swiss army knife of useful weapons and abilities that keep his team alive while dealing damage to the monster. His main form of damage comes from a guided-rocket launcher for increased fire-output. He also deploys AI-controlled attack drones that harrass the monster with light sustained damage. For abilities, Bucket lives up to his class title. With the ability to detach his head and act as a scout drone for the party as well as possessing a team-wide stealth field, Bucket allows his team to dictate the terms of engagement with the monster.

Maggie, the trapper, has the important role of containing the monster and hampering its ability to flee. With a harpoon mine launcher and ‘mobile arena’, she is able to deal modest damage while preventing the monster from moving effectively. She is also accompanied by Daisy, a lizard-like bloodhound that automatically tracks the monster by scent and can even revive downed party members when presented the opportunity. It was an awesome gaming moment when our team roamed through a lush alien jungle while following Daisy to our massive quarry.

Last but not least comes the assault role, Hyde; whom I had the privilege of playing. His objective is simple: kill the monster with extreme prejudice. He brings a minigun and flamethrower to bear on the monster for long and short range damage, respectively. From a distance, I was able to pepper the monster with a hail of lead until the distance was closed and the flamethrower was called to action. Hyde deals the most damage to the monster by far, but he also supplements the team with a ‘toxic grenade’ that creates a damage-dealing zone that can deny a reprieve or ambush site for the monster. His last ability allows him to temporarily ‘tank’ the monster by becoming invulnerable to damage for a short period of time. 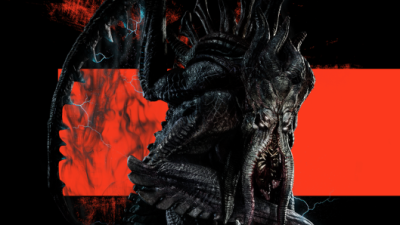 But the true stars of Evolve are the monsters; in this case, one called the Kraken. With a terrifying Cthulhu visage, the Kraken is one of two announced monsters for the game that specializes in long-range electrical attacks. The Kraken possesses the ability to call down an AOE lightning strike from a distance, leave explosive energy mines, and unleash a radial or directional blast of force to scatter and kill the hunting party.

Gameplay for the monster differs from the seek-and-destroy method employed by the hunters. Early on, the monster is in the basic stage of evolution (Stage 1 of 3) where it is vulnerable and at a disadvantage. Therefore, it behooves players controlling the monster to actively hunt and consume the local fauna in order to build up an ‘evolve meter’, which unlocks new abilities and increases its stats across the board. The first stages of the game are a tense cat-and-mouse scenario in which the hunters are actively traversing the hostile landscape in order to find and kill the monster before he becomes too powerful. Once the monster reaches Stage 3, it is able to destroy the hunters’ home-base and is a force to be reckoned with. At this point in the mid-to-late game, the opposing sides are equal and intense fights take place. 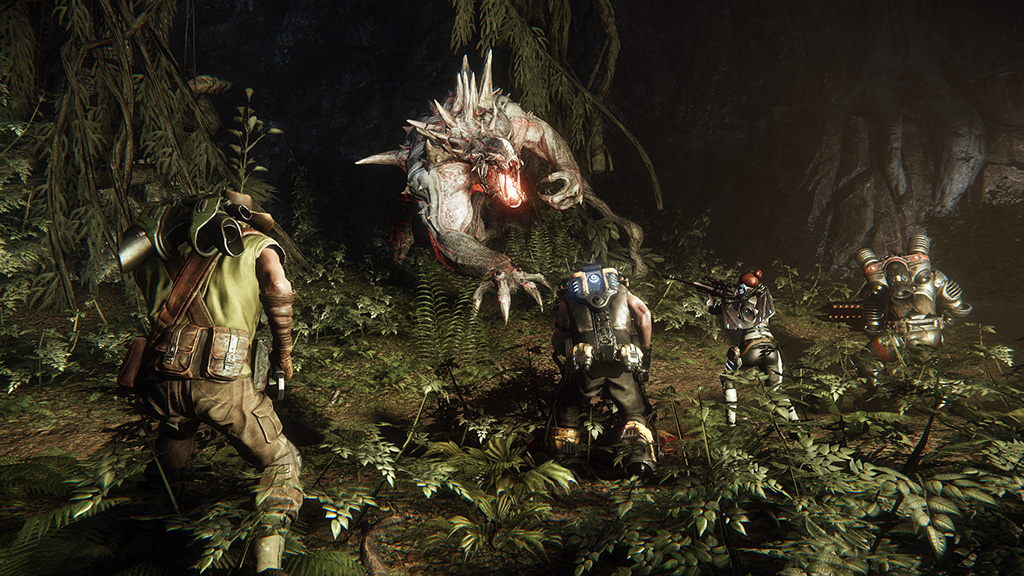 We began our game with a cinematic air-drop sequence where we were able to get a brief bird’s-eye view of Planet Shear- a tangle of jungle and rugged cliffs. After a brief second familiarizing ourselves with our controls,  Daisy, the Trapper’s lizard-dog “barked” as it caught scent of the Kraken and disappeared into the foliage. The hunt was on.

The planet surface was alive with local flora and fauna; both neutral and hostile. We were less than two minutes into the hunt when a pack of ape-like horrors began tearing into the group. We managed to clear the immediate threat, but the ordeal ate up precious time. At that point, I could tell that this hunt was going to be harder than I thought.

We struggled to keep together as we were hounded by all manners of things that go ‘bump’ in the night, but eventually we were able to pool together just in time as the Kraken came into view. I immediately boosted ahead and preceded my attack with a toxic grenade. All hell broke loose behind me as my teammates joined in. Through my headset, I heard our emcee tell our Trapper to unleash the ‘mobile arena’ ability so that we could corral the fledgling nightmare, but he fumbled, and to our dismay, the beast fled at an unreal speed.

Alright, we did some minor damage, and now we have to continue tracking him. Damn. This pattern happened again and again, the trapper being too late to do his job and keep the damn Kraken from running. At this point, it became painfully clear that the hunters truly need to pull through with their roles in order for the team to succeed. Sure, I could lay a hurting with my flamethrower, but I quickly became useless when  the  thing is allowed to run away.

Once the Kraken reached Stage 3, we were informed by our emcee that our home base was now in danger. Upon hearing this, we all rushed home in anticipation of the inevitable siege that the Kraken would bring. Sure enough, we see this nightmarishly powerful monster looming in the darkness. It had grown in size and had grew these glowing wing-like appendages on its back that sparked with electricity. As it floated closer, we started to pour firepower into the creature. It was a tense firefight that at one point had us down three members! At stage 3, the monster is incredibly powerful and makes the possibility of the hunters’ victory a small one. But thanks to Bucket’s stealth field, he was able to revive our bleeding out Lazarus, who in turn brought back the dead party (myself included). The fighting was fierce, fast-paced, and a lot of fun; especially when we eventually were able to kill the Kraken. I felt a swell of pride as we were able to come back from the very brink of defeat and take down the apex predator.

Evolve definitely has the potential to be one of the best multiplayer experiences of next-gen gaming, especially when you consider the possibility of live-streaming the games via Twitch. Look for this gem to release this fall for Xbox One, Playstation 4, and Steam.