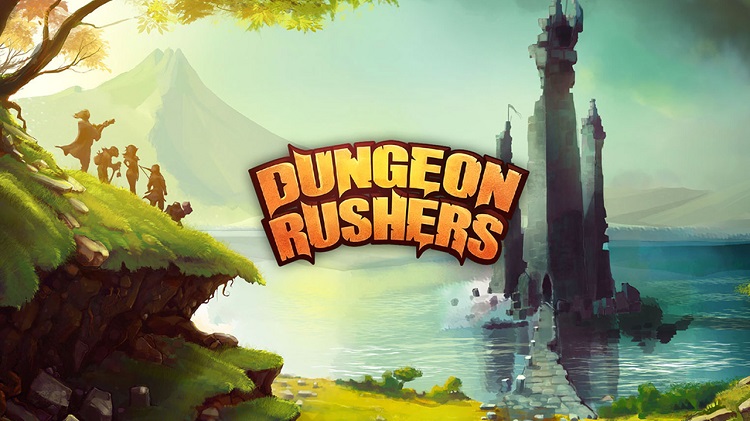 Hook me up with a retro-inspired RPG that mimics old-school titles like Final Fantasy and I’m a happy person. Pair that style of gameplay with a traditional dungeon crawler and I’m ecstatic. Enter Dungeon Rushers, a new and interesting upcoming release from Goblinz Studio. The title plans to blend together traditional role-playing game elements like character progression and combat, with the loot acquisition and exploration systems of traditional dungeon crawlers. The marriage looks good on paper, and after spending some time with an official demo, I’m happy to say that it plays just as well. Colorful characters, a unique and comical storyline, and some solid artistry has Dungeon Rushers shaping up to be a serious Indie contender next year.

Dungeon Rushers looks great from a visual standpoint. During the exploration phases you’ll be presented with a top down view of a colorful map. At the beginning of each level this map is completely shroud in darkness and you’ll need to move “square by square” to uncover it. Hidden among the monster-filled rooms and trap-laced hallways is the exit, and as you progress through the game, maps and dungeons become larger and more complex. Encountering an enemy token (shown by an ominous-looking skull) will toss you into a turn-based battle sequence. The camera angle shifts and you’re presented with a two-dimensional side-view of the battlefield, akin to early Final Fantasy titles. Each environment is beautifully drawn and all of the characters all well-crafted. I was rather impressed by the art style. It’s retro, inspired by the sprites we’ve seen in 32-bit games. But the characters still maintain their own unique style, and although they may mimic traditional RPG roles, they do have unique personalities.

Combat is simplistic in design but offers enough depth to keep it interesting. The tutorial explains enough to get you started and it presents itself in a way that is very easy to understand. At its roots, combat in Dungeon Rushers is very similar to other turn-based RPGs. Players and enemies take turns attacking, using abilities, and even items, and it’s up to you to create a sound strategy to make it through each battle. Certain abilities and attacks cost mana in order to use, and the stronger a specific ability may be, the more mana it will consume. This can be hard enough to manage in a singular fight, but Dungeon Rushers takes it a step further by creating a scenario in which characters do not regenerate mana and health after each fight. In fact, once you enter a dungeon it’s up to you to reach the end, and if your party perishes you’ll have to start all over. You can purchase items like health and mana potions, but you’ll want to keep an eye on which abilities you use and not blow through your magic pool in the early stages of each dungeon.

At completion, Dungeon Rushers will offer more than a simple dungeon-crawling RPG experience. Developers are planning to implement multiplayer features, including some that allow you to craft your own dungeons for other players to explore. A simple point-and-click interface will let you set up a dungeon with room variety, including traps and monster types. You can even battle other players to asses your party’s dominance. There are many different characters to choose from, each with their own special abilities to unlock and power up. It will be up to you to decide what kind of party structure fits your play style. There are lots of opportunities for depth and customization to be had in Dungeon Rushers, and it seems that developers are planning to add a lot more content before its subsequent release.

If you’re interested in getting more information regarding Dungeon Rushers, be sure to check out the dedicated website here. You can also grab a quick demo version of the game, if you want to get some hands on experience with what to expect from this dungeon-crawling RPG title. The game has already been Greenlit by Steam’s popular Indie program, and we are expecting to see Dungeon Rushers hit virtual store shelves sometime in Q1 one of 2016.