Those of you who experienced the Super Nintendo Entertainment System may remember a comedic caveman-based romp by the name Chuck Rock. At first glance, AtomicTorch Studio’s indie creation Dinocide seems like a close relative. That’s no surprise when you consider how adamant developers were when it came to bringing an entertaining retro-inspired experience into the new age. Unfortunately, Dinocide doesn’t manage to evoke the same feelings that Chuck Rock did, for a few reasons. Even though the indie release pairs together two favorable elements in dinosaurs and platforming, it manages to fall short of anything truly entertaining.

Visually, Dinocide does a fantastic job of mimicking platformers of the past. The graphics are perfectly pixelated and very colorful. The sprite designers did very well animating and shading all of the monsters, characters, and dinosaurs. Overall, Dinocide looks better than most old-school games, and may have a little modern flair, but developers succeeded in crafting eye candy that looks and feels as if it came from the early ’90s.

Sadly, the visuals are perhaps one of the strongest points to the Dinocide experience. This is by no means a bad release, and it is important to note that it might feel better to those of you who haven’t played many past platformers. Still, there seems to be much missing to Dinocide’s gameplay, specifically on the fronts of difficulty and variety. You’ll play as a caveman who sets out on a perilous journey to rescue a cavewoman who was kidnapped during a picnic. Curiously, this is almost the same storyline as Chuck Rock, which features a caveman venturing into the untamed wilds to rescue his wife.

In classic retro style, you’ll find yourself moving in a linear horizontal direction. Enemies will appear all over each level and it’s up to you to dispose of them. You can do this by throwing a variety of items at them, including things like axes, arrows, rocks, and other projectiles. Unfortunately, this type of combat takes away from the overall difficulty factor, as most enemies don’t have a ranged attack. Instead of getting close to the enemy, you can sit back and endlessly toss items towards them. This doesn’t offer up much tension and you never really feel that you’re in danger of succumbing to a horde of enemies.

You’ll also have access to a number of dinosaurs that will aid you in your quest. These dinosaurs allow you to ride on their back and some give you access to different projectile attacks. The downside is that there isn’t much attack variety between dinos, and the majority of them differ only by appearance. The only two exceptions that I discovered were the Plesiosaurus, who can be mounted underwater, and the T-Rex, which spits fireballs that can clear giant boulders. All of the other dinos seem like filler, and are just there to help you navigate an already-easy adventure.

Another unique addition to Dinocide is the need to collect food. During each level you will notice that your caveman’s health is slowly draining. It will drain even further if you are struck by an enemy. Once the health bar drains completely it’s game over. The only way to refill the health bar is to collect food items scattered across each level. This manages to add a little bit of tension to the experience, as you find yourself racing against a clock to complete each level before your demise. Unfortunately, food is rather plentiful in each location and the levels themselves don’t seem to last very long. Because of this you never really find yourself in much danger, and the only way you’ll succumb to hunger is if you dodge and avoid all of the food you see. 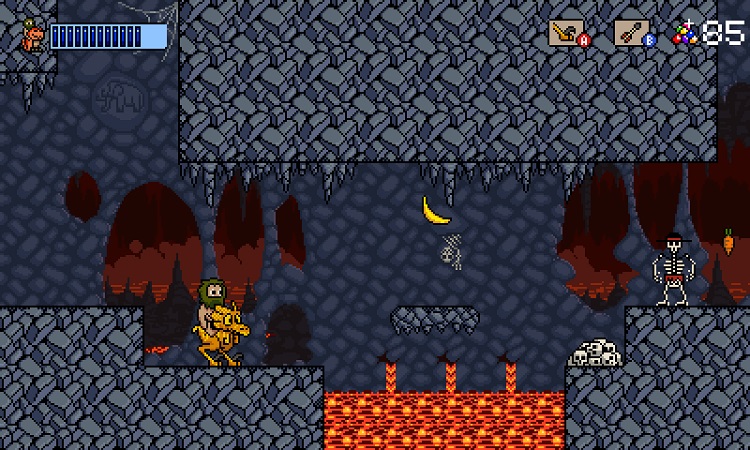 I give a lot of credit to the level designs, which feature great artistry and variety. Developers spent a lot of time creating backdrops and custom platforms that give each level location a lot of depth. You’ll find yourself venturing across icy mountains, barren deserts, flora-filled jungles, and a few other interesting and entertaining areas. The journey of Dinocide is actually quite enjoyable, and although the story and gameplay may fall short, I applaud the art team for giving us such a visually-appealing experience.

Dinocide has a a lot of potential, but as it currently stands the experience gets very stale very quickly. Without much of a challenge (even in boss fights) and a lack of any real variety between projectile types and dinosaur mounts, Dinocide feels like a casual platforming experience. This isn’t necessarily a bad thing, and Dinocide isn’t a bad game, but those of us who are craving something similar to Chuck Rock, Mario, or Mega Man, will quickly find ourselves faced with stagnant gameplay that never really seems to get going. Still, if you’re looking for a simple platformer with a lot of style, you should definitely check out Dinocide. If you’re interested in getting more information about this release, be sure to check out the dedicated website here. Dinocide is available right now on Steam, with full controller support.