I spent countless hours parading around Diablo III. I love dungeon crawlers. I love the endless stream of enemies, the increasingly difficult dungeons, and of course, the overwhelming amount of loot to collect. I can’t tell you how many times I ran out of inventory space and had to make difficult choices on which pieces of loot to let go. Diablo III will always hold a special place in my heart. I will be honest in saying, though, that I’ve been craving something a little different for quite a while now. Apparently developer Spellbind Studios was aware of this and is attempting to remedy it with their new release, Rogue Wizards. 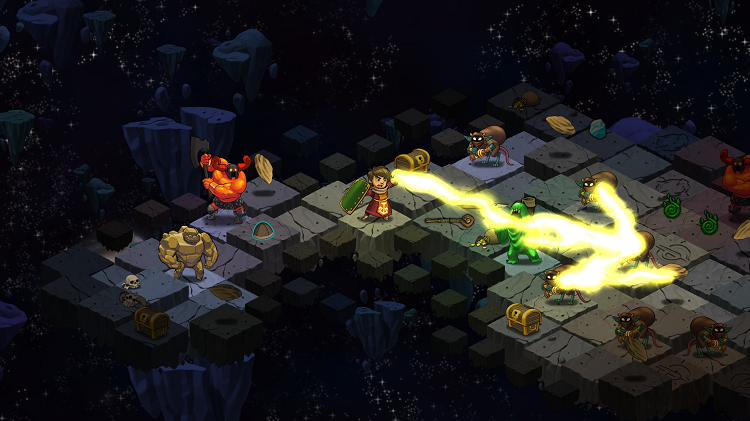 Dungeon crawler is a fairly loose term. There are a lot of releases that take place within dungeons or feature loot, but the term dungeon crawler manages to encompass a detailed set of standards. The game is meant to take place primarily within a dungeon setting (or area that appears mazelike in design), it features an upgradable or ever-expanding loot system, it showcases enemies and bosses, and it usually includes class types much like a traditional RPG. Rogue Wizards manages to tick most of these items from the list. You’ll find yourself enveloped in procedurally generated dungeons that vary in shape, size, and overall artistic direction. Your quest may take you through elaborate “forests,” decaying ruins, or molten passageways. The artistry is one of the most charming aspects to Rogue Wizards. All of the characters seem cartoony, with short statures and exaggerated features. The enemies are designed well and feature great shading and coloring. There is a lot to see in the world of Rogue Wizards, and it’s hard to focus on the fight sometimes. You’ll often find your eyes and mind wandering to enjoy the beautifully crafted backdrops and environments. Developers did a fantastic job in crafting light-hearted visuals that should appeal to a wide audience.

Rogue Wizards blends together a few different elements to craft a unique gameplay experience. You won’t find yourself mindlessly cleaving through massive groups of enemies. Instead, each encounter will toss you into a smaller scale struggle. Rogue Wizards features turned-based combat, which will keep you from monotonously mashing the attack key. This style of combat isn’t appealing to everyone, but Rogue Wizards manages to keep it simplistic enough that it should appeal to those of you who have disliked turn-based combat in the past. The desire for epic loot and an underlying storyline should be enough to keep you motivated through the early stages of combat. Once you get your bearings, and the training wheels come off, you might find yourself enamored by combat system. You won’t simply be slashing at your foes, either. There are many spells to unlock, each with its own unique value. Each enemy has its own strengths and weaknesses, so understanding each spell and amassing a full arsenal of magic is the key to victory. 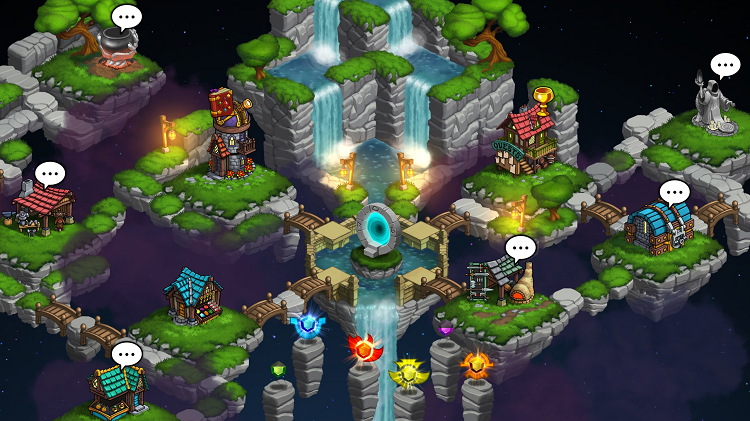 There are many weapons to find, although it’s unfortunate that weaponry doesn’t seem to hold the same value as magic. Weapons include things like spears, chakram, wands, throwing weapons, swords, shields, axes, bow, and staves. Unfortunately, cosmetics seem to be the only real difference between each weapon type. Holding a two-handed spear or staff will not gain you any type of attack bonus, and you won’t be able to use new spells or attack enemies from farther range. For this reason, using a sword or an axe will give you a considerable advantage since these one-handed weapons can be used with shields. Wands and throwing weapons are consumed after a few charges, but bows have an infinite amount of ammunition. This means you’ll really only want to stock up on swords, axes, shields, and bows, throughout your journey. It would be nice to see developers craft more variance with their weapon choices in the future.

This lack of difference oozes over into “class building” as well. Each level-up will award you with points, which you can place into stat-lines for strength, stamina, and finesse. These attributes won’t offer much aside a damage and health bonus. The real meat and potatoes of character design is how you choose to spend points within the six trees of magic. Each magic set contains a series of spells that can damage enemies, heal the user, create shields, or inflict status effects. I won’t go into much detail, as to not spoil the excitement of discovering new spells, but it is important to note that you won’t instantly have access to the entire magical arsenal. Upon gaining a level, you’ll be rewarded with only three points to place into any given tree. It’s up to you to decide what spells are most valuable, and which you would like to carry with you into battle.

When you aren’t questing for loot or knocking out powerful enemy bosses, you’ll find yourself in a small town. Rogue Wizards introduces the aspect of town-building, alongside the traditional dungeon crawler experience. You’ll be able to use materials and funds you gather to create a larger town, adding specific areas that will allow you to craft better items, unlock spells, and research new enchantments. It’s a nice little addition to the genre, and helps to set Rogue Wizards apart from the rest of the market.

Rogue Wizards is a very enjoyable dungeon crawling experience. It isn’t elaborate like Diablo III and doesn’t feature as much as Torchlight 2, but it still possesses its own charms and merits. It’s important to note that a lot of the popular dungeon crawling experiences on the market were crafted by large development teams with a lot of funding and equipment. Rogue Wizards is an indie release, and was created with love and care by a single developer. I’m very impressed with the product that Colin Day has crafted, and I’m hopeful that the developer will continue to release updates and future content.

Rogue Wizards is available right now on Steam, and a mobile version (iOS and Android) should be available sometime next year. If you’re interested in getting more information regarding this entertaining indie dungeon crawler, be sure to check out the dedicated website here. You can also follow developer Colin Day and Spellbind Studios on Twitter.