A good multiplayer session is one of the most rewarding experiences in gaming. A lot of single player titles feature story-driven gameplay and enjoyable elements that can leave you very satisfied. Still, there is just something so enthralling about getting together with a group of friends and tackling a game together. Because of this, games like Little Big Planet, Call of Duty, and Destiny have become mainstays in the world of cooperative and competitive multiplayer gaming. But even with a multitude of game types to choose from, there are still developers dedicated to creating experiences that are truly unique. Take, for example, Clandestine: a stealth/hacking adventure from creator Logic Artists. 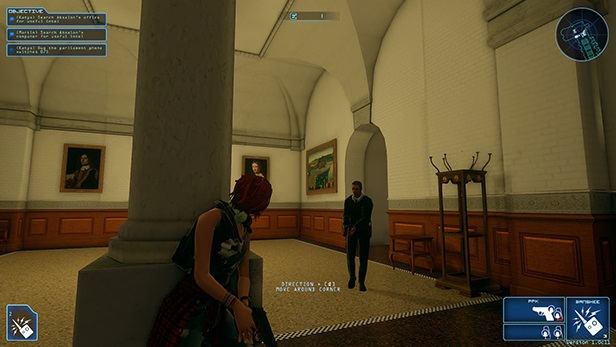 At its core, Clandestine operates like many other old-school stealth titles. Games like Splinter Cell, Hitman, and Metal Gear Solid come to mind, offering up a world where stealth is highly recommended and combat can be a very unforgiving experience. The key difference in Clandestine is the ability to fluctuate between two roles: the spy and the hacker. This unique twist is made even better by the ability to play cooperatively with a friend, allowing each of you to take on a different role. Those of you looking for a single player experience will still be able to swap back and forth between hacker and spy, allowing you to control all of the action yourself. Although it is important to point out that gameflow is severely affected when playing in singleplayer, as it forces you to completely halt progression of one role in order to pick up the other.

The role of the spy, Katya, should feel familiar to those of you who dabble in stealth action titles. You will find yourself  in a 3rd-person view, slinking around corners, dodging enemy patrols, and using hand-to-hand combat to incapacitate foes. You will have weapons at your disposal, but the firearm-based combat in Clandestine falls a little flat. Martin, who plays the role of hacker, has a completely different interface. Rather than a 3rd-person action view, you’re presented with a series of screens. Each of these screens holds valuable information that must be relayed to the spy in order to keep them tucked away in the shadows. A tactical map will give you the ability to guide Katya towards her goal, while certain hacking skills will allow you to see around blind corners and even subdue guards. You aren’t completely safe though, as you’ll have to work your way through the network and around the “admin.” If the admin crosses your path within the network, you’ll be kicked from your program and forced to reconnect. This will leave the spy in a very vulnerable position, blind in the field.

Success in Clandestine means mastering your given role, but is also heavily reliant on how well you can work with your partner. Each character has certain tools and traps that must be implemented by their ally. For example, Kayta can toss mobile cameras around corners and into rooms, which Martin can then hack into to give both players visuals on otherwise inaccessible area. Martin is also limited to how much of the network he can access without assistance. There may be times in which Katya must find a specific console and upload data so that Martin can infiltrate deeper into the enemy’s network. This style of gameplay can be very rewarding when both players are focused, and it creates an entertainingly smooth gameplay experience. Because each player is in control of a specific role, and those players are reliant on one another, it makes for very fluid game flow.

Clandestine has a lot to offer for an indie release. An engaging storyline, full of twists and turns, is punctuated by solid graphics and unique gameplay elements. It may be clunky and choppy in some spots, but the game does a great job of achieving the gameplay experience that developers wanted. If anything, this release should act as a great stepping stone. It’s a solid addition to the world of stealth action games, and a great multiplayer experience. If you’re interested in getting more information about Clandestine, be sure to check out the dedicated website here. You can grab Clandestine right now off Steam.