I’m often asked what my favorite video game is. For many of us, this is a difficult question: the list is often in flux, is easily affected by moods, and let’s face it: it’s tough to commit to just one.

After years of giving multiple games as an answer in service to that question, I finally settled down and gave Deus Ex: The Conspiracy the top spot on my list, citing not only its powerful story, but the proper combination of RPG elements, stealth and subterfuge, and action to keep me gripped the entire time.

Now, a new game is attempting to give the idea of sneaking and circumventing security a new, cooperative angle: Clandestine.

It’s a slow and deliberate game, Clandestine, which released to Early Access on Steam about a month ago. In it, you play as a pair of wetworkers tasked with various missions of a sensitive nature that require not only a delicate touch on the ground, but quick fingers on a keyboard, as well. 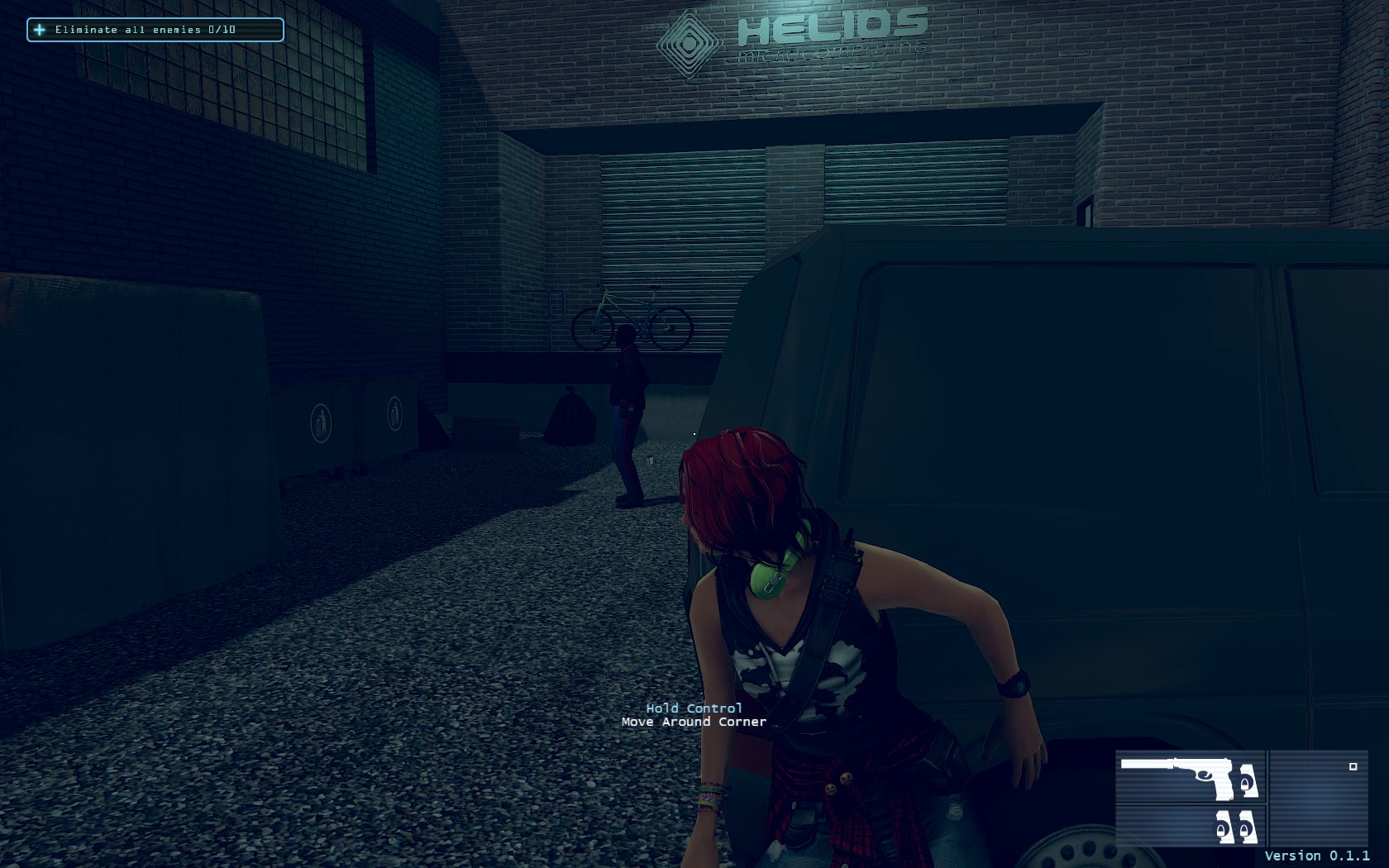 What follows is essentially a slower version of the newer Splinter Cell games, but with a hacking element that you’ll often fall back on (in single player) or will be delegating a variety of supportive tasks to (in co-op). It’s clear that the game was built with the co-op in mind, the single-player game suffers from a lot of input problems, even for a game in Early Access, if I’m honest, but once the UI issues are sorted, there’s definitely an interesting product here.

In its current form. the game has no story, though one is planned. There are four maps for you to test the waters in, and a variety of game modes to try that offer decidedly different experiences all around. First is Cleaner, a game mode that drops you in and tasks you with killing or knocking out all enemies in the area. Exfil places you inside the zone and places enemies on unusually high alert, forcing you to move quickly but cautiously to your goal. Smash & Grab puts you outside, as well, but requires that you find your way in and recover three pieces of intel in order to meet your goal.

Along the way, you’ll also be tasked with collecting other pieces of intelligence and generally trying to get through without being seen, in order to boost your score at the end, as well as secure additional funding and skill points (neither of which are currently implemented in the game, but have entries on various screens, regardless).

The action of the game has two distinct archetypes: sneaking and hacking. The player controlling the spy plays as Katya, a red-haired Joanna Dark-type that’s a little less trigger happy, and considerably sneakier. You’ll be roaming around the stage doing all the dirty work: shooting and beating up guards, punching in codes, and picking up intel to get the job done.

You’ve got a few options available to you as you try to accomplish your goals. Before a mission, you have a chance to decide on a loadout to suit your style that can consist of a variety of firearms (which can range from high-power, hard to control pistols with more rounds to other, smaller pistols to keep your recoil low and rounds on target), different ammo types (ringfoil rounds for knockouts on headshots, but no other damage elsewhere, for instance), grenades (nonlethal flash or frag), and other devices to serve more niche purposes (the Banshee stuns nearby guards, while pagers can be thrown and called as a one-time distraction device). 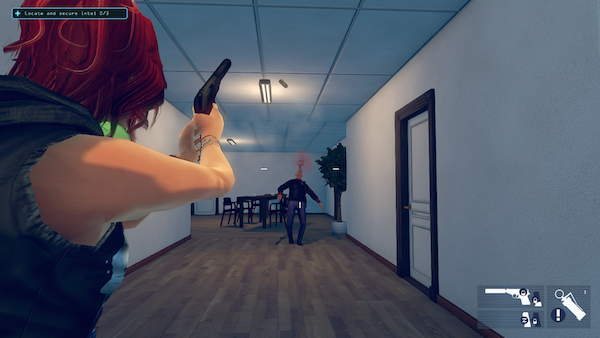 Katya can wear different costumes, as well, which can alter how you approach your objectives in more direct ways. As of now, there are only two options: low-profile gives you fewer ammo and gadget slots, but decreases your detection rate and lets you get closer to guards without their becoming suspicious. Otherwise, you can suit up in a tactical vest that offers more protection from bullets and gives you more pockets.

The really interesting part comes when you’ve got a partner in the game with you. Your partner controls the hacker Martin, and their help is absolutely necessary to smooth out the wrinkles in your work.

You see, the levels in Clandestine are not small. Not only that, but they’re populated with fairly advanced security systems (for a game based in the mid ’90s, anyway), that scoff at all those other stealth games that seem to feature wide gaps in security camera coverage and easily picked locks.

In single player, you’ll need to find a safe place and enter the hacking view manually in order to utilize the various tools therein, but in co-op, as the hacker works, you’ll see what ways they’re helping you as you both communicate to make sure things go off without a hitch.

The hacker can mark guards by identifying them on security cameras and marking them manually on his map. He can monitor threats through said cameras in order to relay facing information or advancing threats, while also temporarily disabling or repositioning cameras to make sure Katya isn’t spotted. If a door has a keypad lock, the hacker can crack the code and communicate it to the spy, who needs to punch it in manually. The hacker can also remotely access PCs that Katya attaches a remote modem to to sift through their emails and use that information to their advantage. The hacker might also locate intel or identify other pathways that may not be readily available to the spy, and relay the appropriately. 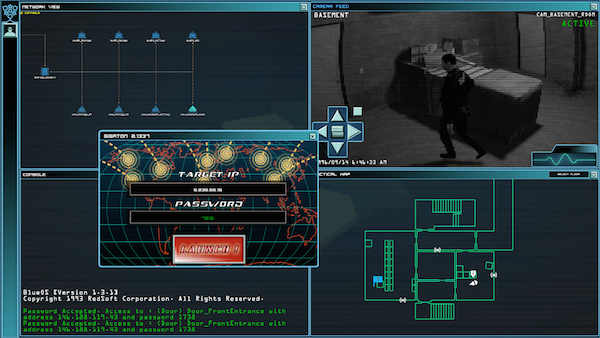 It’s a very good interplay for asymmetric co-op, and really embodies the feeling you get from old James Bond films and the like. When things are quiet, the slow and steady pace as camera feeds of what lies ahead pop on on your screen ratchets up the tension. When things get hot, shouting to your companion that you need the code to the second door on the left in the hallway while you’re crouched behind a vending machine can be heart-pounding.

The game is in an insanely early mode thus far, so you’ll have to overlook quite a bit to find a strong sense of enjoyment here, though. The game’s pacing is almost painfully slow as it stands, and detection boxes for various items is still sketchy at best. Even the most accurate firearms in the game seem to shoot at truly insane angles after you’ve acquired a target, and the game has a lot of trouble blending animations and determining where cover really is.

That being said, the concept is sound, and just needs many, many more layers of paint. If you’re a proponent of the Early Access system and want to do your part to improve the game with your feedback, it is one that I hope comes through. It’s only had one major update since it went live, so I cannot speak to how reliable the devs are about keeping up with updates, but with a little effort, this game has a boatload of potential.

Check it out on Steam, if you’re so inclined.  The price is a little steep for what you get, at $29.99, but if the finished game by Logic Artists is even half of what I imagine it could be, this could be a real winner.