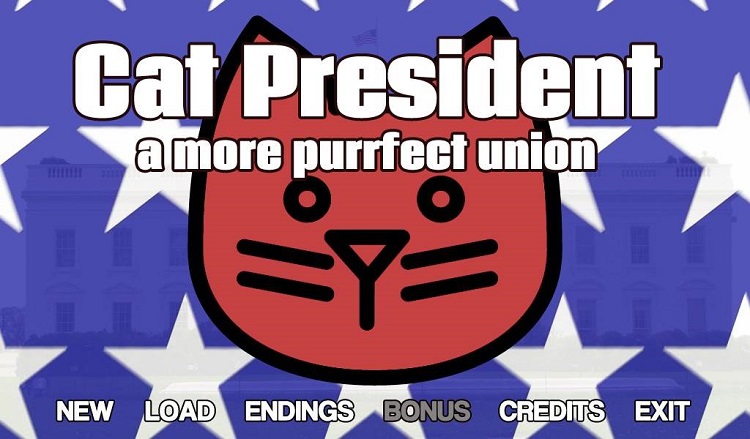 I play video games for a variety of reasons. They’re fun, they’re engaging, they challenge my brain. They also offer a great escape from some of the more intense situations that arise in everyday life. Between crime, poverty, general bad news, and even politics, the real world can feel pretty heavy at times. For those of us who live in the United States, politics has been a front and center issue for the past few months. Harsh words, promises, and lies are being steadily thrown back and forth between each of the USA’s potential presidential candidates. It’s easy to get caught up in all of the frustration as political parties and their followers jockey for position. Thankfully, there are some kind souls out there that are attempting to shine some positive light on during this hectic time. Indie developer Oh, a Rock! Studios is turning civil matters to satire with their release, Cat President ~A More Purrfect Union~.

Why spend all of your time bickering between Democratic and Republican when you can choose between the Fancy Furballs ore the Sharpclaws? Cat President ~A More Purrfect Union~ places you into an alternate reality in which the traditional political system has been completely phased out. In this world, traditional human politics were almost responsible for completely collapsing the world. Corruption and greed led to horrible situations in which governmental bodies were on the verge of bleeding the planet dry. This forced the Supreme Court to completely outlaw human presidential candidates, and created a new era in which our feline friends are “purrmitted” to take the Oval Office. It sounds pretty insane I know, but you’d be surprised by how well cats do as political figureheads. In fact, in the twenty-year span since the banning of human candidates, felines have managed to shrink the entire election system down to three states. Rather then lengthy primaries across a variety of locations, a new nominee is chosen by tabulating the votes from New Clawshire, South Catolina, and Meowa.

Cat President ~A More Purrfect Union~ is a visual novel at heart, so don’t expect any elaborate gameplay here. Your main focus is to pick from one of six different cats, in an attempt to skyrocket them to the presidential podium. Along the way, you’ll be forced to make a variety of choices that will have a direct impact on what happens to your candidate. It’s up to you to sift through the rather ridiculous scenarios and help your feline friend achieve superiority over his foes. A lot of the questions you’ll be asked and tasks you’ll oversee are pretty silly, and it’s important to understand that Cat President ~A More Purrfect Union~ is not a visual novel that takes itself seriously by any means. If you’re a fan of rather interesting and “unique” visual novel experiences like Hatoful Boyfriend and Hustle Cat, you’ll find a lot of entertainment in this release.

Cat President ~A More Purrfect Union~ features 350 pages’ worth of dialogue and events to play through, and you’ll be able to unlock different endings for each cat archetype. If you feel like taking on a challenge, you can back Kale. This cat is currently in “last place” and has a hard time standing out from the crowd. You’ll need to do some serious advertising if you want the world to notice this under-appreciated furball. DJ Nibbles is an incredibly energetic and likeable kitten who has a very hard time focusing on political events long enough to truly please the people. Keeping him mindful of the task at hand is the key to victory. If niceness is your game, then Dr Nom Noms is the name. Unfortunately, he doesn’t have any political experience and the word around the campaign trail is that your best friend has a rather huge crush on him. Frisky is a flirtatious feline, making him the perfect eye candy for POTUS, but keeping him focused on the campaign trail and off his passions is easier said than done. If you’re the type of go-getter that likes to sling dirt, you’ll want to follow Thunderpaw. He’s a no-nonsense agitator that spends most of his time belittling his opponents. Last but not least is Rover, a very eccentric “cat” who isn’t like any of the other candidates, for one very peculiar reason.

Once you find a candidate to back, you’ll have to work hard and put your problem-solving skills to the test. There are contests to win, rewards to be had, and even love to be found. Cat President ~A More Purrfect Union~ is a wild visual ride from start to finish. It’s hilarious and much more engaging than you’d think. Unfortunately it isn’t without flaws, and those of you who are visual novel connoisseurs may not be as impressed. It’s a much better experience if you fully except that it’s meant to be outlandish satire and completely silly.

That being said, there were a few complaints regarding the assets that the creators used to bring their creation to life. Most of the models and backdrops can be freely downloaded and used in a variety of games. This isn’t necessarily a bad thing, but it does limit the visuals quite a bit. There aren’t really many animations, and a lot of the characters feel stiff. There is also the issue of getting lost at points when individuals are talking. There are no subheadings to alert you to whom is speaking, and because of this it can be difficult to decipher information sometimes. In reality, you’re paying the ticket price for this release to engross yourself in 350 pages of cat puns and wacky scenarios. With a slightly high $8.99 price tag and a lack of visual prowess, it may benefit you to wait until this release is on sale.

I still wholeheartedly believe that Cat President ~A More Purrfect Union~ is something that all of you should experience, especially those of you who love visual novels and are seeking something wild and comedic. You can grab Cat President ~A More Purrfect Union~ right now on Steam and Itch.io. If you’re interested in getting more informeowtion about this release, be sure to check out the developer’s website here. You can also follow the creators on Twitter, Facebook, and Youtube.