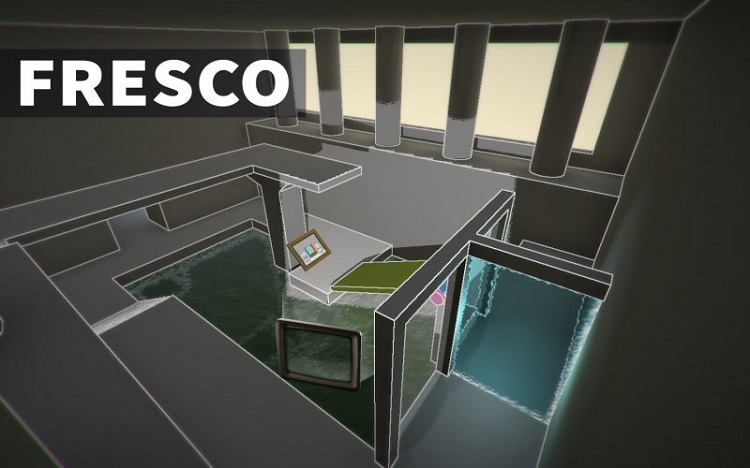 Challenge your perspective and puzzle-solving skills in ‘Fresco’

First-person puzzle games have been rapidly gaining ground in the newest era of gaming. Smash hits like Portal, Portal 2, and Antichamber have been testing gamers’ perspective awareness for years, while new releases like Echoplex promise to bend the mind even further. There is something so satisfying about conquering these title’s that fans are willing to lineup and take the mental abuse. This has caused developers to seek new heights, pushing the limits for first-person puzzles and inventing new and interesting ways to challenge players. Case in point, Fresco, an upcoming perspective-shifting puzzle release from developer Yannick Gerometta.

You won’t find yourself inundated with enemies or slaying powerful foes on a quest for glory. There isn’t an elaborate storyline filled with plot twists and character developments. Fresco is a clear cut puzzler. You’re alone with your thoughts, surrounded by mysterious rooms and curious paintings. Each area you come across will seem like a dead end and it’s up to you to make your way past all of the pitfalls and solid walls. Obstacles are overcome by manipulating the space around you, and exits will manifest themselves through your “creative perspective.” In order to conquer the game world, you’ll need to make use of a series of unique paintings found in each area. Whoever painted these works obviously used the surrounding environment as inspiration, because each painting will “match up” to specific sections within a given level. The key is to carry these paintings and match their perspective to specific locations. Matching a painting to the background can do things like create bridges, build stairs, eliminate obstacles, and even actualize exits. Some paintings will need to be used more than once, and some will need to be rotated or flipped to fit correctly within the scene. It appears that levels will begin with easily solved “tutorial-like” zones, before exploding into difficult rooms filled with multiple paintings and obstacles. 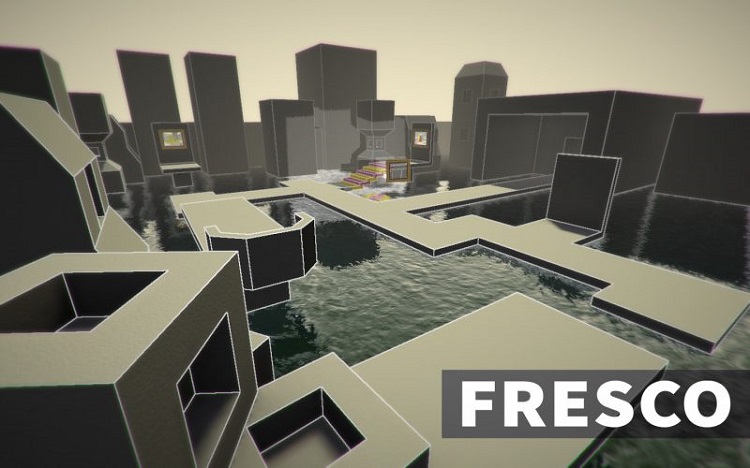 Visually, Fresco features very simplistic geometric designs. The areas lack a lot of small details, but do feature some nicely modeled platforms and walls. A lot of Fresco is monochromatic, with small splashes of color highlighting potential exits and puzzle solutions. In its current state, there is no music, but there are a few simple sound effects that trigger when you move and manipulate a painting. It is important to note that Fresco is currently in early-stage alpha creation, and with no release date in sight, the game could visually change quite a bit. It’s already rather polished, and it will be interesting to see how the developers envisions the game world when the product is finished. Subtle details and calming musical scores would go a long way in making this upcoming release a truly spectacular affair.

I’m rather excited to see where the developer takes this concept. The gameplay elements within Fresco showcase a lot of promise. Current gameplay videos and trailers give us a glimpse at the simplicity of manipulating these paintings and overcoming obstacles, but we don’t really see much that appears to be severely challenging. Games like Portal and Antichamber did a fantastic job in creating many frustrated gamers. Each featured areas of “extreme” difficulty that, upon first glance, didn’t seem to have a clear-cut solution. Hopefully Fresco will feature some specific areas that offer up a serious challenge to even the most hardened of puzzle players. Perhaps a mode that is separate from the rest, so that the original game doesn’t cause so much frustration as to not be enjoyable. It will be interesting to see exactly where Gerometta goes with this concept in the upcoming months, and hopefully we will start to see the true vision for Fresco start to take shape.

If you’re looking for something to bend your viewpoint and test your critical thinking, you’ll want to keep your eyes on this interesting title. We don’t have any solid release date, or any idea on when to expect a release for Fresco. Honestly, I’d prefer that Gerometta take as much time as needed to polish Fresco as much as possible. This release has a ton of potential, and could easily be one of the better first-person puzzle games we have seen in the last few years. If you’re interested in getting more information regarding Fresco, be sure to check out the dedicated website here. You can also follow developer Yannick Gerometta on Twitter for any applicable news updates. We will be sure to keep a close eye on this project and update with any findings in the future. Be sure to stay tuned if you’re a puzzle fanatic.