Brave The Canadian Wilderness In ‘The Long Dark’

You’re going to die, though, get used to that part.

I’ve been historically drawn to games that challenge you to just live. To take yourself from having almost nothing to general self-sufficiency. The idea of scavenging up supplies from the tattered remains of civilization is always appealing, and brings us back on a visceral level to our hunter-gatherer roots. Enter The Long Dark, another survival-focused indie title from Hinterland Studios. 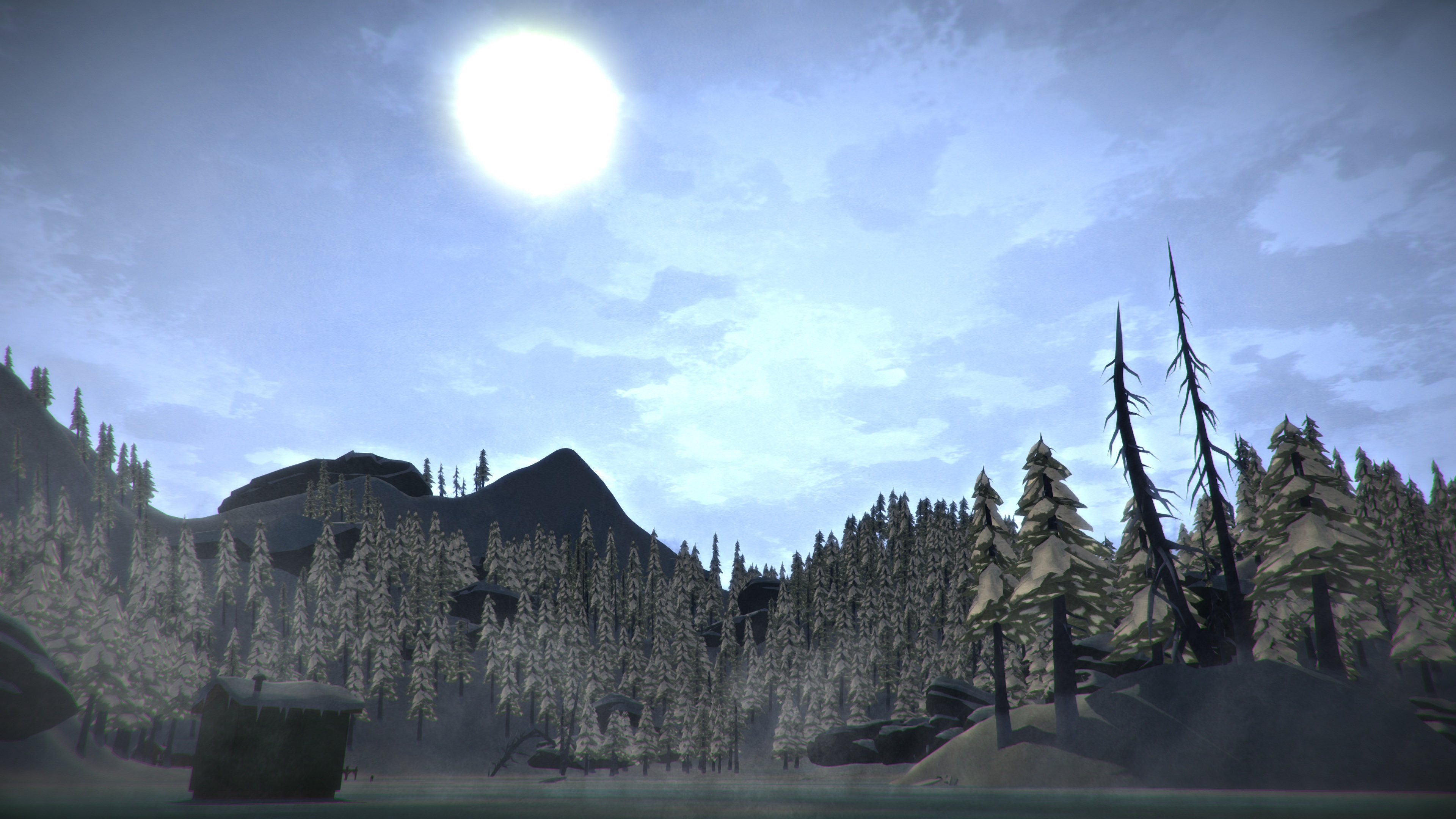 While the general theme is the same as other games, the premise is just different enough to make this game feel a little more grounded in reality. Rather than trudge through deserted urban streets after a plague turns people into cannibal monsters or secluded towns where supernatural events have rendered the place empty, you were simply a pilot flying over Canada when a strange geomagnetic event caused your systems to fail and your plane to go down.

What ensues is an experience that feels distinctly more isolated than many others I’ve experienced recently. You’re distinctly alone in this endeavor, with nothing but wolves and deer punctuate the landscape. The only people you find are often frozen, half-buried in the snow—a fate you’re trying very hard to avoid.

I suppose what draws me to these games is how ethereal the setting and narrative tends to be. There is no endgame, rather survival is the goal. And as the game fondly pointed out to me with a Chuck Palahniuk quote, “On a long enough timeline, the survival rate for everyone drops to zero.” You’re dealing with many elements here, and living is no simple matter.

Obviously, it’s cold there in the Great White North. You’re thrust into unknown territory with little more than some basic clothes, some matches, a bottle of water, and one emergency flare. It’s up to you to figure the rest out on your own. You’ll do this by navigating around a wooded landscape, scrounging bodies and cabins for various supplies and food.

There are five major aspects of your condition you need to manage to live. First and most obvious is the cold. The weather is fairly dynamic, and if winds kick up or you decide to try to forage at night, you’ll find that your light fleece sweater and jeans won’t quite keep you warm enough to make it through a full day. The cold is insidious, you’ll often start your games dropping into the “freezing” state rather quickly, and stay there for quite a while, watching your condition tick slowly toward zero. You need to find a way indoors—hopefully with some wood for a fire—in order to keep yourself from freezing. You’ll also need to dismantle spare clothes and find sewing kits to try to keep your clothes in good condition, lest they start to fail at keeping the cold winds at bay. 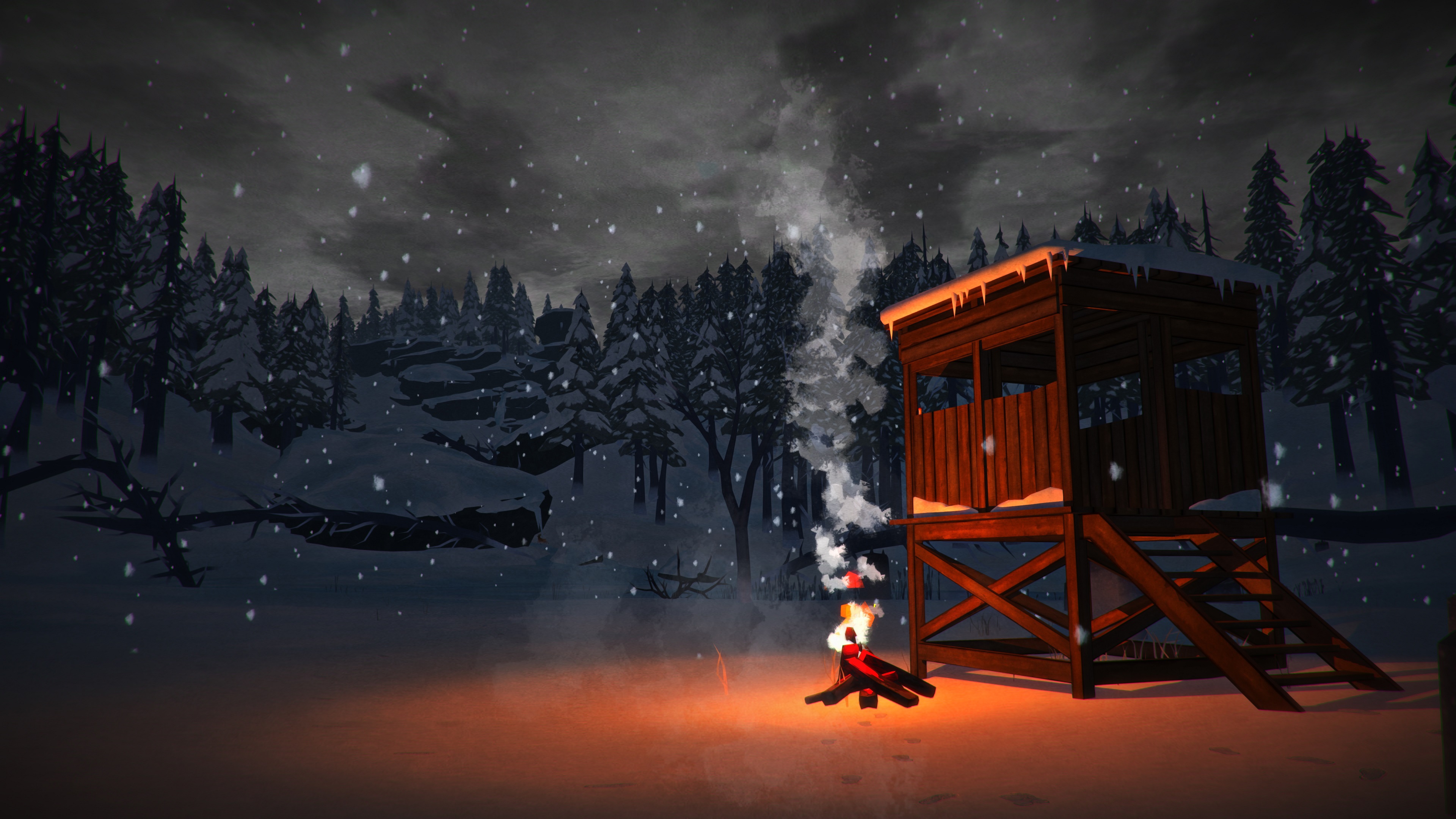 Obviously food and water and similarly important, each having its own individual meter to manage. Without the right tools, finding appropriate food is difficult, often relegatedto small bags of beef jerky and granola bars found in drawers. Eventually, you’ll hopefully be harvesting venison from deer and cooking it over a fire to keep yourself going, melting snow and boiling water to make sure you don’t contract any kind of food-or-water borne illness.

Likewise, if you don’t get enough sleep, you’ll find yourself become less and less effective at everything you do, as lighting a fire in a raging blizzard is difficult when you can’t make heads or tails of the world around you. Your pack becomes harder to carry, your vision blurs, and you become more and more clumsy (I ended up trying to run from a wolf and sprained my ankle in the process, limiting my mobility immensely, all because I hadn’t been able to find a good place to rest safely).

Obviously, injury is the other major factor in your survival. Of my five or so games so far, three have ended at the jaws of a hungry wolf (one very shockingly that appeared inside a building that was safe in a previous game). At the moment, injury is fairly simple to fix, but difficult to come back from, requiring significant amounts of rest to restore your normal condition, which comes at the cost of a lot of time spent not acquiring food and water, which are constant nagging needs. 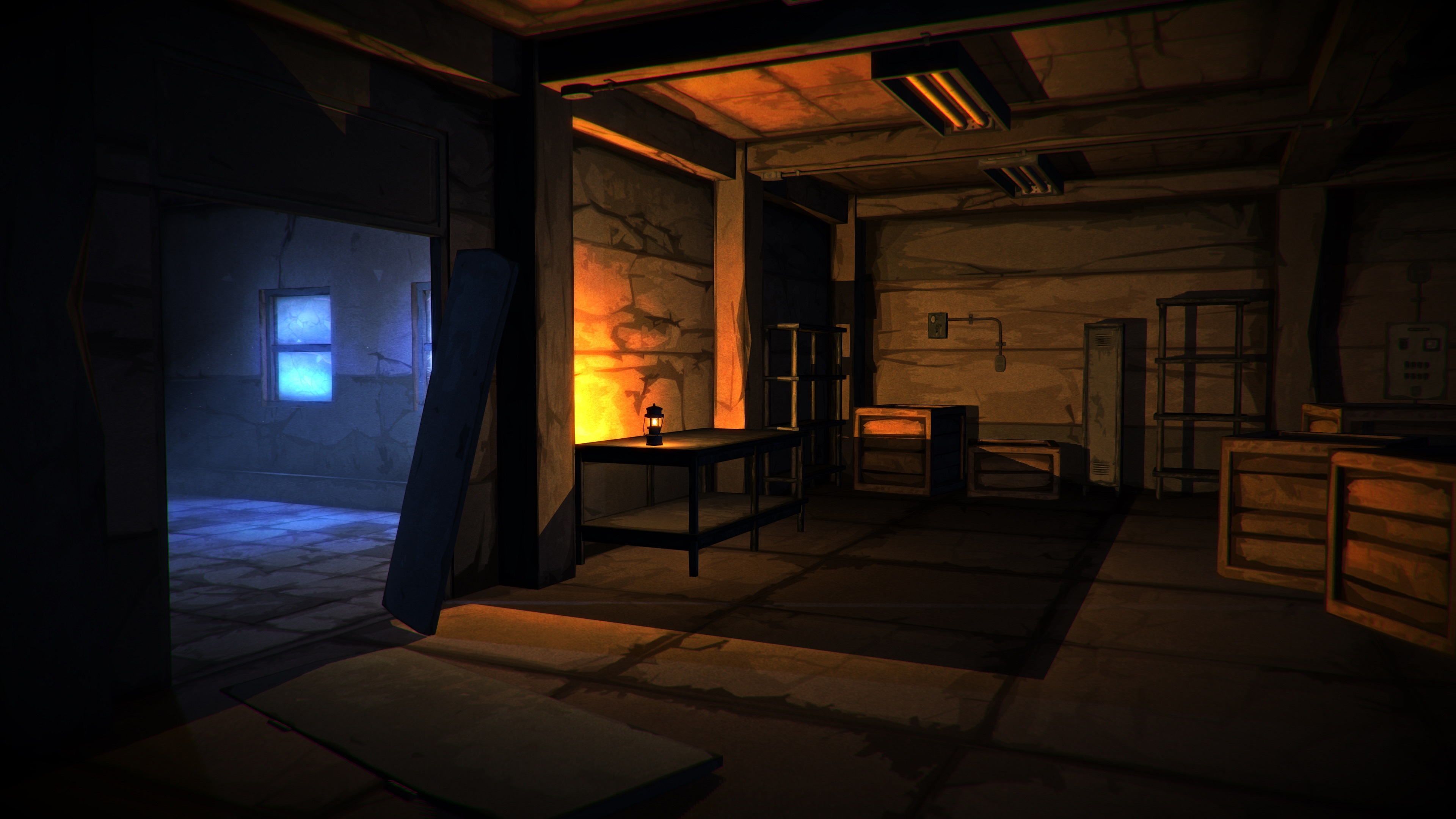 Basically, you’ll live as long as your condition remains above zero percent. Exhaustion, freezing, starvation, dehydration, or injury all negatively impact your condition (injury does so the most drastically), but as long as those negative factors are not present, your condition will slowly rise. A bad cut might be solved by tossing some antiseptic on it and wrapping it with a bandage, no harm. You might need to drop some painkillers and rest for four hours to recover from a sprained ankle, though—and four hours feels a lot longer in the game than you might think.

The game is slow and deliberate, very specifically filled with little more than the sounds of the wilderness around you and your character’s occasional mutterings about their condition. Your movement is slow, and the HUD elements are minimal, allowing you to dive headlong into the game with little distraction. The game is much like The Forest, but meant to look a little less “realistic” and without the cannibalistic tribesman.

The game is done in a painted sort of watercolor style that evokes feelings of the Telltale Walking Dead series, but from a first-person point of view. It does a good job of making sure the game can likely run on most systems, and helps to solidify the feeling of isolation, while also having stark color contrast to make obvious landmarks or places of relative safety more inviting and rewarding to find.

It’s still an Early Access game, so obviously there are issues and features that haven’t been implemented. Despite it’s relatively low-performance look, the game suffers from frame rate drops often. More than once, I’ve thrown a flare into a room to get a good sense of its contents, only to have the flare stick to the ceiling or fall through the floor. As it stands, there’s only one area (large as it is), and the map function hasn’t been added yet (it will be minimal, only tracking major landmarks). The controls occasionally feel like they’re fighting me, and menu navigation can get cumbersome. The game could do with a little tuning around the edges, is all. 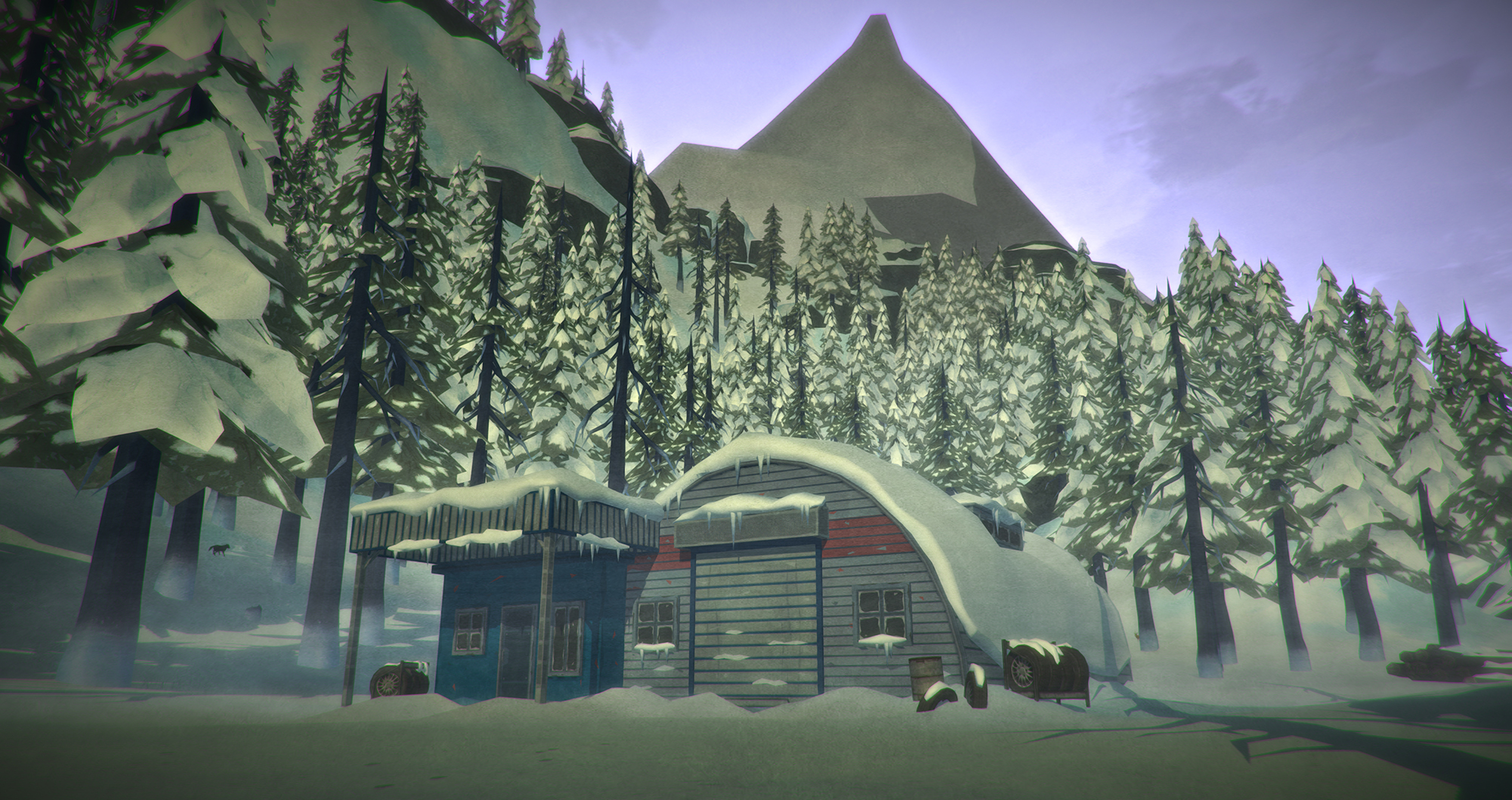 It’s definitely a survival game with what feels like a more down-to-Earth view on everything. Where games like Don’t Starve or Darkwood work with limited resources and similar feelings of needing to “survive” in a harsh space, they’re more game-y, while The Long Dark feels distinctly more about the experience than the game itself, if that makes any sense. It’s more sensory than one might think, and less focused on its individual mechanics. It remains to be seen whether that’s a winning combination, but thus far this seems like a game you might want to follow, if not try yourself.

It’s out on Steam Early Access right now, as a matter of fact, though it feels a little steep at $19.99 for how much game you get out of it as it stands. Check out a trailer below to see the game in action.