Brains Weep As The Room Moves From Mobile To PC

Back in 2012, Fireproof Games unveiled a mind-torturing puzzle game, dubbed The Room, onto mobile platforms. Unfortunately it was only released onto mobile devices, which means all you phone-and-tabletless puzzle fanatics out there were missing out on some seriously good mind-benders. But thanks to Fireproof’s recent overhaul of their popular title, and the ever-so-useful Steam platform, you can finally get your hands on this incredibly well-done piece of mental floss.

For those unfamiliar, The Room is a simplistic puzzle game with a seemingly sinister, almost eerie lining. You play as “yourself,” trapped in a dark, foreboding room and forced to unlocked a series of puzzle boxes in the hopes of escaping. The room itself is perhaps the most unsettling aspect of the game, as it contains very simple furniture, illuminated only by the moonlight of a nearby window at the glaringly bright rays of a single spotlight. This downplayed environmental design helps the true stars shine in this release, putting the intricate, ornate, and mentally taxing puzzle boxes on a front and center display. There is minimal story told, and you’ll find yourself discovering more about your surroundings and what may be at the end of your journey through a series of scribbled notes, left from a previous “box opener.” 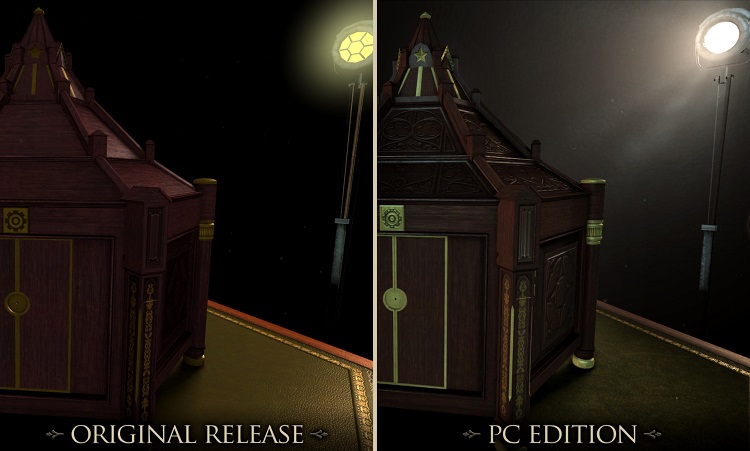 The most impressive part of The Room may not be the puzzles themselves, but rather the impressive visuals and three-dimensional designs throughout. The title was even put through a graphical overhaul. We are used to seeing these types of “click-and-escape” puzzle games flood the market, but The Room should be classified as a true work of art. The developers went the extra mile when crafting the art for this title and it really shines on PC. There is no excuse to miss out on this release now, especially given the cheap price tag on Steam.

The Room is pretty lengthy, with four puzzle boxes, and each box containing a series of other boxes, similar to a Russian stacking doll. You shouldn’t feel too intimidated either, if you don’t consider yourself good at puzzles, as the title features a handy in-game hint system. You grab The Room on Steam for a mere $4.99, a small price to pay for an experience that will stay with you for a far more significant portion of time than a lot of other games these days.