Let me first start off by saying how excited I’ve been for Black Desert. Ever since I discovered the Korean MMO during a random web search, I’ve been chomping at the bit for it to release in the United States. I waded through countless fan sites, Twitter feeds, Facebook postings, and anything else I could find pertaining to a Western release. It seemed like an absolute eternity, but Black Desert has finally made its way to American soil, and will release very soon stateside. Fortunately, thanks to the kindness of a friend, I was able to participate in the final closed beta sequence before the game sees its official Western release.

Hype can be a very dangerous thing — just ask any AAA title developer. Publicity for a game prior to launch is always a good thing, but there comes a point when too much publicity can create an overwhelming hype train. These hype trains, while good for initial sales, come packed with high expectations from consumers. When a particular release fails to meet these oftentimes absurd and irrational demands, there is usually much backlash from the community. It’s a dual-edged sword. This was where I was at for Black Desert. I was so hyped up by what I had seen with videos and screenshots that I was playing all of these nonsensical scenarios out in my mind. I had fallen victim to the hype train, a train that tends to derail with MMOs quite often. However, I’m elated to announce that after spending the short time I did with the closed beta test, I’m now even more hyped by what Black Desert has to offer, as it met my expectations and showered me with a lot of unique gameplay elements that I was unaware of.

When you first open Black Desert, you’re greeted by a beautiful title screen that features rotating in-game images of prominent in-game locations. From there, you move to the character select and creation screen. I wouldn’t go as far as saying Black Desert has the most detailed character creation system, but it’s got to easily be in the Top 5. You’ll have the ability to fine-tune all of your character’s features, and touch up a variety of things like hair length and color. What is most impressive is the ability to tune almost every aspect of your character’s body. You can either pinch and drag various fields, or use a more traditional approach with numbered sliders. Whatever you decide, Black Desert gives you the tools to create a character that is completely customized, down to some of the smallest details. You’ll even pick what star sign your character was born under, just to add a little customized flair to your backstory. 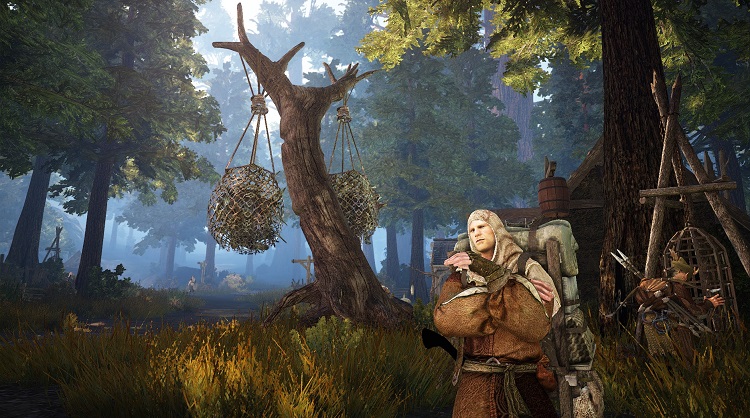 What is perhaps most impressive is the amazing artistry that went into the creation of this release. Black Desert, in my personal opinion, boasts some of the most impressive graphics I have ever seen in an MMO. Developers did a fantastic job in creating a game world that features stunning backdrops and expertly-crafted landscapes. I spent a lot of time during the first part of the beta on foot, and it gave me ample opportunity to fully immerse myself in the surroundings. I’ll admit that I ended up wasting a large chunk of my play-time simply running from location to location and admiring all of the artistic detail. Black Desert is gorgeous, and the visual prowess doesn’t stop at the locations. The character themselves are beautifully crafted, from their expertly-carved faces down to their perfectly-anatomical forms. Enemies are no different. I encountered a lot of different baddies on my journey, and they are every bit as fun to look at as everything else. The animations are a huge part of the beauty too. Elaborate attacks look gorgeous as characters twist and dance through the air. Even witnessing the simplicity of a sword swing, or seeing a character in full sprint, provides much artistry to be admired. Graphically, Black Desert seems leaps and bounds above the competition, and it’s easily one of the most visually impressive MMOs to date.

Graphics aren’t everything though, and it’s not enough that a game simply looks good. It has to play well, and offer gamers a lot of entertainment value. Black Desert does a great job on this front too. Movement is very fluid, although I must admit that jumping feels very stiff at times. Each character is also affected by a sense of physics, which adds a lot of detail. Those of you who decide to play as a Berserker/Giant will find yourself moving at a snail’s pace and watching your axes sweep the air in wide arcs, while smaller characters like the Valkyrie Human dodge effortlessly in battle and use acrobatic kicks and sword swipes to down their enemies with great speed. The combat mechanic itself is very smooth. Most of your attacks can be triggered by inputting a special button combination. For example, hitting down (S) and an action key (like F for example) will trigger one of your character’s skills. You can bypass the combo system in most instances by placing skills directly onto a bar and then hitting the 1-9 keys on the keyboard to activate them. Pair this combo system with the free-form aiming and swiping combat, and you’ve got a release that feels more like a traditional console-based adventure RPG than an MMO. You won’t be locking onto targets or automatically hitting them. You’ll have to aim your attacks, and time your dodging. Some characters like the Valkyrie and Warrior can even guard attacks with a mighty shield, but only from the front. This means you’ll have to keep your shield trained on the enemy in front of you to fend them off. Because of this entertaining combat system, you’ll find yourself focusing more in battle. You’ll need to learn when you strike, and when to dodge certain attacks. It adds a thin layer of strategy and makes each battle a much more memorable affair.

Black Desert Online currently contains twelve different classes in Korea, but the Western release will only see eight of them to start. There is some speculation that this is due to the fact that the remaining four classes are very Eastern in appearance and play style, but many Western fans have welcomed these class types with open arms. Because of this, it seems that developers plan to release the Ninja, Kunoichi, Blader, and Plum sometime in the future. For now, players in North America and Europe will have access to Tamer, Berserker, Sorceress, Witch, Wizard, Ranger, Warrior, and Valkyrie. There is no level cap implemented in Black Desert, but developers note that it will be exceedingly difficult to gain new levels once you hit a certain point (around 50). This end game offers a unique system called “awakening,” which will transform your chosen class into something very powerful. Not all of the awakening weapons have been showcased, but we do know quite a bit leading up to the Western release. Warrior starts his journey with a sword and shield, but will awaken to heave a might two-handed greatsword. The sorceress begins without much of a noticeable weapon, but gains a monstrous scythe once she has awakened. The Berserker has an impressive set of dual axes, and goes the route of Mega Man by strapping a cannon to his arm. The Ranger keeps one dagger in her hand, but places an elemental sword in the other. The Valkyrie is shown to replace her sword and shield with a larger shield and a massive lance that she’ll wield with one hand. The Tamer keeps her beast friends, but has a shiny new staff to assist her. We don’t know much, if anything, about Witch or Wizard, but can expect to see those in the future.

Black Desert has a lot of depth and rich lore associated with its characters, but the game itself is a massive world filled with a lot of content and depth. I play MMOs regularly, but Black Desert was the first game to overwhelm me. The beta didn’t offer much hand-holding past the general MMO-style quirks. How to use potions, how to move along, simple combat tactics, and how to interact with NPCs are covered by the opening sequences. Past that, you’re pretty much on your own, and there is a lot to see and figure out from the moment you arrive in-game. Crafting and gathering are important parts of Black Desert, but fishing plays a pretty large role in gathering money and items. Luckily, this style of fishing is a mini-game, and doesn’t force you to sit still for incredibly long periods of time. I managed to gather enough silver to purchase a horse mount in a short period of fishing. It’s a very lucrative way to bring in cash at low levels. But it’s important to note that selling fish isn’t as straight-forward as you would think. Sure, you can sell them to the merchants, but you won’t get nearly as much as you would if you sold them to a trader. The problem is that traders make use of the node system, a massive inter-working of nodes across the world map. In order to sell your items for full price to a trader you must ensure that each required node is connected. If they aren’t, you can expect to only receive thirty percent of your item’s actual value.

Nodes were pretty difficult to understand when I first started, but they’re basically part of a large puzzle. Nodes can be “unlocked” by speaking to a node manager in a given area and spending contribution points to open them. You can gain contribution points by doing quests and helping locals. Some nodes cost more than others, and you won’t be able to unlock nodes freely. They must be unlocked in a chain, which can become quite the puzzling affair if you aren’t focused on unlocking them in the beginning. I found myself ignoring the nodes at the start and it caused me to backtrack for a while when I was ready to sell my items. Unlocking nodes will also give you access to certain perks within the area, like EXP bonuses. Black Desert also features an intimacy rating for NPCs, and has a “conversation currency” system known as amity. When you first enter a specific location, you can gain knowledge about its inhabitants by speaking to them. You can then use these pieces of knowledge during conversations with NPCs in order to gain amity. The amity mini-game revolves around picking interesting individuals that pertain to what the particular NPC is looking for. If you’re successful in piquing their interest, you’ll gain a certain amount of amity. Gain enough of this with a particular NPC and you’ll unlock a series of things like quests, special discounts, new items to buy, and even secret items you can purchase. 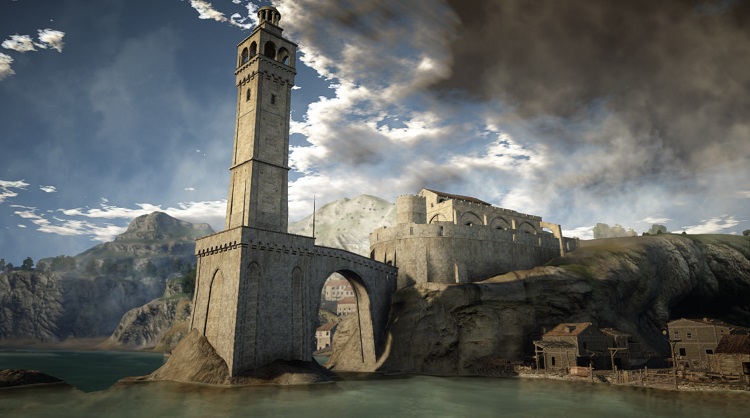 Take note that playing the conversation mini-game with NPCs and performing certain other tasks will cost energy. You’ll gain more energy capacity as you level up, and you’ll gain one energy point for every three minutes of time passing. It will be interesting to see if developers add some kind of magical energy potion to the game, but hopefully they won’t make it available in the cash shop. Those types of “pay-to-win” or “pay-to-progress” models have turned many gamers away. Although, with Black Deserts buy-once-to-play business model, it would be odd to see them implement such a tactic. They seem to be progressing in the direction of Guild Wars 2, by offering players a purchase-once atmosphere that also offers cosmetic-only cash shop items.

Black Desert launched here in the West yesterday, on March 3rd, so we no longer have to wait to answer some of these curious questions. If you’re interested in getting more information about Black Desert be sure to check out the dedicated website here. You can also check out developer Daum Games on Facebook, Twitter, and Youtube.