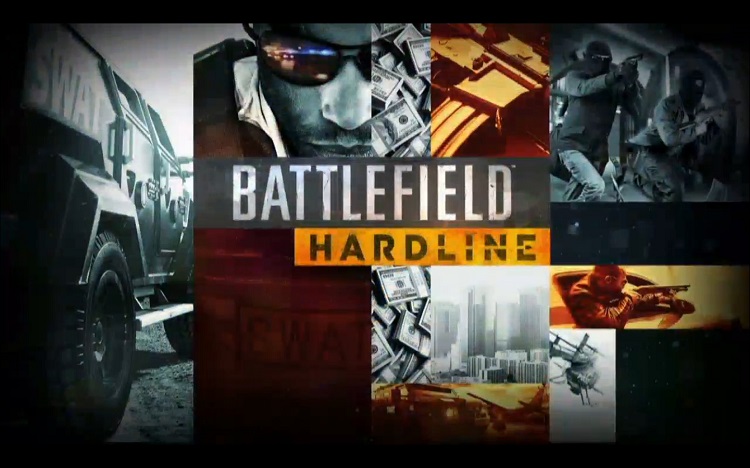 Battlefield: Hardline demo gives us a glimpse at the upcoming release

There is no denying that Battlefield 4 was a massive let down. One of the most anticipated titles of 2013 quickly turned to one of the biggest flops of 2013, thanks to a mass of broken servers and a slew of glitches. It was a far cry from what veteran developer DICE usually produces, and a lot of players were left jumping ship back to Battlefield 3, just to get their fix. It wasn’t long before a broken Battlefield 4 fell into obscurity, and gamers turned their attention towards other shooters. This hadn’t stopped developers from spending a decent amount of time attempting to revive the game, and at one point DICE actually put some side projects on hold in order to focus all their available man power towards fixing what ailed Battlefield 4. In the end, it was deemed a failure (mostly from video game review websites), and DICE turned its attention towards a separate project, one they were hopeful would redeem them and wash away the stigma of a rough release. 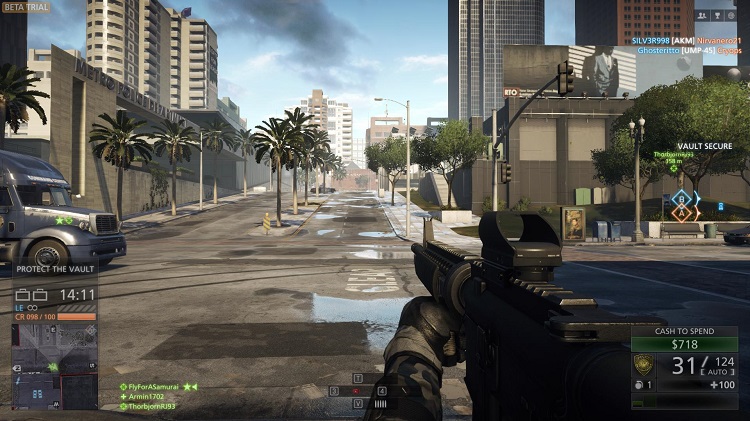 Battlefield: Hardline, was unveiled during E3 2014, and was a pleasant surprise to a lot of DICE fans who weren’t necessarily anticipating another Battlefield title so soon. On the outside, Hardline seemed like an entirely new game, but after seeing the gameplay we became quickly aware that this was very much a Battlefield title at heart, and hopefully one that could bring back the entertaining gameplay we were craving. The mechanics, color schemes, unlockable systems, battlepacks, and classes, are all fairly cookie cutter for the Battlefield series and Battlefield: Hardline is no exception. The difference between this release and its predecessors, is the theme, and the subsequent game modes that have popped up as a product. Instead of playing as a soldier, and battling against one another for war supremacy, you’ll be thrown into a world of cops and robbers.

This isn’t simply a skinned over title with a mass of visuals that make it feel like a interesting twist. DICE has not only transformed the maps into chaotic modern playgrounds, but they have introduced a variety of game modes that work incredibly well with the justice against the lawless theme. We were more than excited to jump into the open beta to see where this upcoming release is headed. The beta gives you access to the Battlelog so you can compare your progress and scores with friends, and there is quite a bit to unlock here, even in this scaled down version. Although the most exciting aspect of Battlefield: Hardline might be the newest game modes. 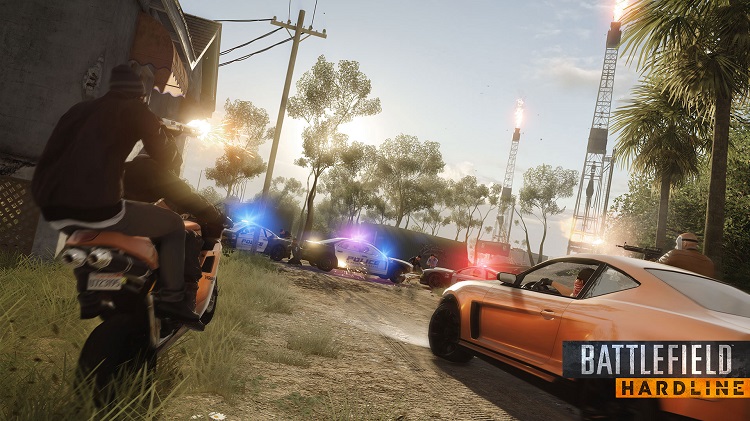 Heist is a high-adrenaline snatch-and-grab in which criminals attempt to steal high-value packages and then deliver them to specially marked zones. In this mode, the police attempt to drain the criminals of 100 tickets before they can grab the loot. Police will have an unlimited amount of tickets, so strategy and skill from the opposing team is a must to attain victory. Playing as a police officer in this game mode gives you a pretty distinct advantage. You’ll have the ability to post-up wherever the drop off points are located for the criminals, picking off enemies as they try to escape. Playing as part of the Wolf Pack can provide you with quite a challenge, as stealing a package will paint a massive target on you, forcing you to make your way through all the gunfire to escape. Fans of the Payday series may feel right at home here when playing as a criminal, although we won’t be seeing any creepy clown masks or getting into the intense details of swiping loot without raising an alarm. The heists in Battlefield: Hardline give you no chance to develop a strategy before hand, you’re simply thrown into the action.

Hotwire is an homage to conquest, but with a speed infused twist. Players will work to grab vehicles stashed across the map. These cars and trucks act as capture points, and driving them at a certain speed will allow you to control them for your team. As you hold a vehicle, the opposing teams “tickets” will rapidly deplete. The more vehicles held at one time, the more the tickets will drain. Special weapons like rocket launchers and heavy machine guns are stashed all over each map, and allow players to quickly eliminate a vehicle. Once a vehicle is destroyed, it will reset. It is entirely possible to kill an enemy that is in a vehicle and then commandeer it, and Mechanics can make a killing in points by simply keeping hotwired vehicles repaired as they race around the map. The best part of Hotwire is that squadmates and other players can hop right into your vehicle with you, and can even hang out the windows to shoot at enemies. Not all the action takes place in a car though, and you’ll be able to eliminate any stragglers on foot if that’s more your style. This game mode is the perfect blend of vehicular, air, and ground-based gameplay.

Both of these modes, along with a standard Conquest mode, were featured in the recent demo, but we expect a few more game types to be available in the upcoming release. Blood Money will have both teams clambering to to retrieve money from a large crate in the center of the map. Trucks will be used to transport this money back to specific drop-offs. You will even be able to grab money from opposing teams trucks. Rescue has the police attempting to rescue a certain number of hostages in a certain amount of time, while the criminals try to stop them. Lastly is Cross Hair, a 5-versus-5 game type where police attempt to guard a high-value target and criminals must eliminate the target before time runs out.

As it currently stands, Battlefield: Hardline out-does the lackluster Battlefield 4 experience in a variety of ways. Those familiar with the Battlefield series will have an easy time adjusting, as the gameplay is pretty much identical to other title’s within the franchise. When we took part in the demo we were presently surprised by the amount of work that has gone into this release, and were happy to discover that a lot of the issues that plagued Battlefield 4 were pretty much non-existent. If there was any negativity to take away from the demo, it’s that the hit detection can be a little messy sometimes (especially with sniper rifles), and there were a few glitches we would fall into, but they were few and far between. This is very much a positive title, and one to look forward to. We are hopeful that it will be even more polished as its impending March 17th release date approaches. If you’re interested in getting more info on this future title, be sure to check out its dedicated website.