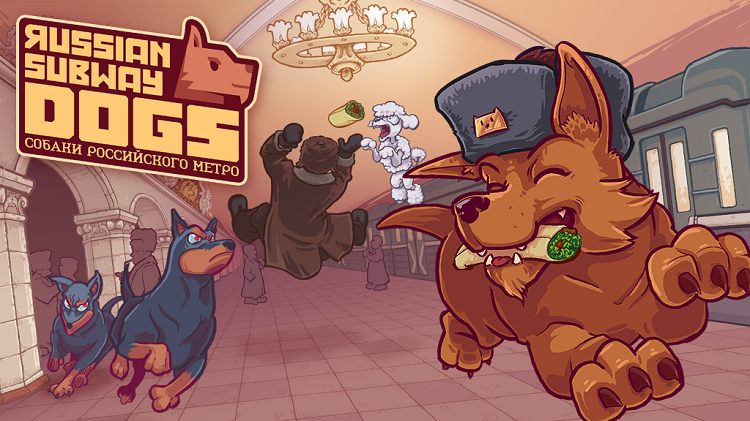 Bark for food, battle bears, and use vodka as a weapon, in ‘Russian Subway Dogs’

Every so often an indie release comes along that isn’t like anything else we’ve seen. Russian Subway Dogs is one such example. This upcoming indie release from developer Spooky Squid Games features a unique “storyline” paired with some interesting gameplay elements. It’s important to note that this style of gameplay isn’t anything revolutionary, and we’ve actually seen it before with the 1984 classic Alley Cat. Still, Russian Subway Dogs offers some up unique gameplay variances that make it look and feel like an entirely new genre of game. Pair this with fantastic visuals and a great soundtrack and it’s easy to understand why we have such high hopes for this indie project.

Russian Subway Dogs is a visually adorable game. The graphics were the first thing to catch my attention, and they have a wonderfully whimsical pixelated appeal. This is no surprise considering the developer also created the visual work-of-art They Bleed Pixels. You’ll find yourself on a bustling subway platform, filled to the brim with ornate backdrops and modern train cars. The residents of Moscow hurry back and forth along the platform, dressed for the harsh snowy environment and carrying an array of food items. There is a lot of detail to be found and as each level progresses, things will get slightly more visually chaotic. You’ll also find electronic infused Eastern European folk music from composer Peter Chapman.

Great visuals and the energetic soundtrack aside, the real bread and butter for Russian Subway Dogs is the gameplay. For those of you unaware, this upcoming release is based off the actual phenomenon of stray Russian dogs using subway trains to travel. Each day in Moscow these stray animals hop onto passing railway cars from the suburbs and ride them inward to the cityscape. There they seek food and shelter. This has become a common occurrence throughout the capital and most of the citizens there view the dogs as part of the community. Spooky Squid Games used this interesting and heartwarming story as a catalyst for its newest indie release. The focus on Russian Subway Dogs is to use your canine prowess to secure as much food as possible and keep yourself fed during the harsh winter in Moscow.

In order to grab some delicious grub you’ll need to first frighten it from the grip of any nearby humans. You can do this by barking, which will cause most patrons to jump and toss their food item into the air. Once the treat is airborne, you can leap up and snatch it from the sky or let it hit the ground and nibble it at your leisure. Note that you’ll receive much more worth for the good if you manage to grab it before it can touch the ground. This will fill your hunger meter faster and help you progress further through the railway. The beginning of your journey is a very calm and serene affair, but as you move deeper into the city you’ll begin to encounter new dangers. There are other hungry dogs just waiting to steal your grub, so you’ll need to be quick on your feet and tactical about what treats you seek out. There are also massive subway bears that see everything that moves as a food source — even you. Thankfully, you’ll have one simple Russian staple at your disposal to help fend off any baddies. Vodka can sometimes be freed from the hands of a human, but it’s not meant for canine consumption. Touching this alcoholic drink will light you ablaze and taking too much damage can end your level entirely. Sometimes you’ll need to avoid vodka, but you can also bark towards it and float it through the air like a volley ball. This is especially useful for getting rid of other dogs, bears, and can even be used to free food from large groups of people.

Russian Subway Dogs is currently seeking funding on Kickstarter, with some unique stretch goals that will directly impact how the game is played. Extra funding will go towards the addition of new playable characters, new locations, and even entirely new level designs. There are also special physical rewards for certain backer tiers, including an adorable Russian Subway Dog plush.