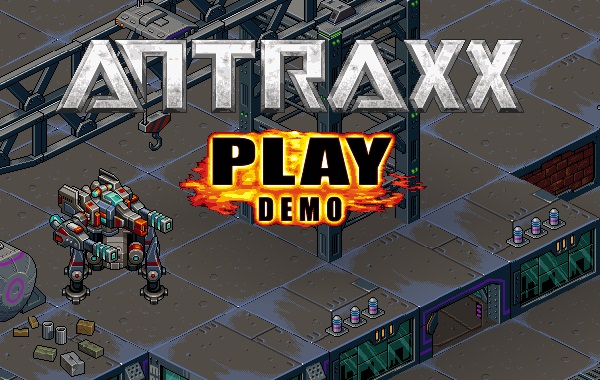 Think back to the last time you played a browser-based MMO, or any browser-based game for that matter. For some of you, it might be as far back as the Runescape era. As good as games like Runescape and Dofus were, there is a certain stigma that comes associated with the words “browser-based” in the modern era of gaming. It’s easy to understand why someone might give a browser-embedded game a passing glance, especially with all of the new and exciting indie games that arrive on Steam each day. But to give a passing glance to Antraxx, a browser-based mecha MMO, would be a huge mistake. The upcoming creation from appropriately named developer Antraxxed, is promising a lot of in-depth gameplay for absolutely no money on your part.

The premise behind Antraxx is quite simple. You’ll pilot a mecha through an expansive battlefield, working closely with allies in order to overwhelm any foes in your path. On the outside, this game looks much like any other release in which you use a giant walking machine to lay waste to your enemies. But underneath the simplistic facade lies a living, breathing, massively multiplayer game world that features a lot of customization and a heavily player-driven world economy. There are many things to see and do within the world of Antraxx.

When you first drop into Antraxx, you’re greeted by brightly colored retro-inspired graphics. The ’80s style mechanized surroundings immediately draw you into a top-down two-dimensional world that is teeming with detail work and futuristic eye candy. When you’re not busy blasting baddies away with mounted cannons or laser beams, you might find yourself absentmindedly engrossed in all of the visual beauty that the environment has to offer — although it may be difficult to see sometimes, through the intense sprite animations and battle effects. Massive lasers fly across screen and super heated bullets race toward their target. Explosions can riddle the sky at any moment, and large, clunking mechs strafe back and forth to gain an advantage over one another. The visuals for this release are actually quite enthralling, and the fact that it’s all drawn and pixelated makes it even more impressive.

Those of you seeking intense mechanized gameplay will be rewarded with a smooth flowing movement system and simple gameplay mechanics. Since the view is top-down (in a sense), it’s easy to navigate your hulking death machine around each level. Each weapon has its own type of projectile-travel time, so you’ll need to practice on where and when to shoot to hit your opponent. Nice large red damage numbers pop up whenever you land a hit, so it’s easy to tell when you’re clobbering a foe and when you’re simply shooting the air around them. The developers currently have plans to offer a wide array of mech and weapon types, but the current demo will allow you to choose from three stock mechs to fool around with.

The finished product promises to bring a massive amount of depth to the Antraxx world. You’ll be able to piece together your own mech creations, through a series of parts, movement mechanisms, weapons, and abilities. Each mech promises to be unique and offer a wide variance in play style. Parts will be tradeable, purchased, and even farmed from enemies. The economy and politics within the game will be shaped by you and the rest of the community, making it a player-based affair. There are currently plans to offer team-based matches, cooperative play, and free-for-all (which is featured in the demo). Developers make a point that Antraxx will focus heavily on teamwork, and specialized sections have been added that may require multiple players working in tandem to operate. For example, one player may need to stand on a specific switchpad, to allow another player access to a moving elevator. This style of teamwork will help you get a lg up against the competition, and it makes the massively multiplayer affair a much more social experience.

Each level within the game will provide an array of unique challenges to overcome. Some areas may have severe height advantages and disadvantages, while other areas offer less mobility and are flanked by hazardous water pits. It will be interesting to see what types of levels developers crank out before the game is officially release. There is also talk that you will be able to secure your own parcels of land, where you are free to let your imagination craft its own stages and battlegrounds. This is truly a multiplayer experience that is meant to be piloted entirely by the community at hand, and those of you who enjoy crafting should find a nice playground in the level editor.

The Antraxx demo, which you can play here, already looks beautiful and feels entertaining. This is just a tiny bit of what the developers are working towards, so it’s easy to imagine how impressive Antraxx might be when it’s completed. The fact that it’s going to be free, paired with the fact that it can be enjoyed seamlessly within a browser or downloaded as its own client, makes it a game that you should definitely keep an eye on.