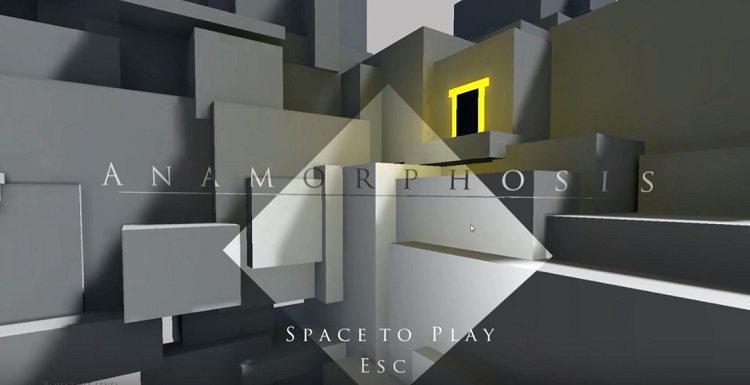 Every so often a new genre craze takes over the video game world. Sometimes it’s subtle, like a  simple series of puzzle games, or it can be larger scale, like a group of MMOs. Take, for example, the upcoming release of Devilian, Blade and Soul, and Black Desert. These Asia-based MMOs all share similar action-based combat systems. It’s usually pretty easy to spot the latest trend, no matter the size, but sometimes new innovations slip quietly on scene. Case in point: Anamorphosis, an ambitious new puzzle adventure that focuses heavily on optical illusions.

In its simplest form, anamorphosis can be defined as a picture or object that appears distorted from one angle, and perfectly normal from another. Developer Lucien Chen shares an adoration for these types of optical illusions and was hopeful to craft a game that would tease the minds of its players. In Anamorphosis, illusions and puzzles can be found anywhere. It’s all about perspective, and when entering a room you will most likely see a jumbled mess of lines, a seemingly flat room, or a series of distorted objects. The key to success is finding the “sweet spot,” that will change your perspective and allow you to see the room for what it really is. Sometimes it’s as simple as standing in the right spot and looking in the right direction, but Chen has also added in a few unique gameplay elements to give this title more depth.

The acquisition of the almighty camera will make your adventure into Anamorphosis much more enthralling. The camera is a device that allows you to instantly change the perspective of certain objects. For example, upon entering one room you may find a completely flat surface with an exit door painted on it. By standing in the right place, aiming the camera, and snapping a photo, you’ll instantly switch that 2D plane into a 3D space. This will allow for some very complex puzzles later on, and should give Chen the tools to really push the envelope. Hopefully we will see some mind-bending puzzles and innovative gameplay as a product. Anamorphosis is still in the infantile stage of development, so we don’t know how many tricks the creator has up his sleeve.

It’s tough to say what we can expect from the release graphically. In its current state, Anamorpohosis features modernized, yet simplistic visuals. However, the developer recently connected with a 3D artist who has joined the project as a dedicated creator. What we do know is that the project will feature a combination of 2D and 3D elements, seen through a first-person perspective. If the trailer looks and feels familiar, it’s because Anamorpohsis actually shares quite a few similarities with the upcoming optical illusion puzzler, Museum of Simulation Technology, from Pillow Castle Games. Each title features puzzle rooms, exit doors, and perspective-based challenges, but different puzzle types and strategies.

Anamorphosis is shaping up to be a great addition to the latest optical illusion craze, and hopefully Chen will have the resources available to fully realize his dream. This title has the potential to be one of the better indie puzzle games in some time, and we are keeping a close eye on the development progress. If you want more information regarding Anamorphosis, be sure to check out the dedicated website here.