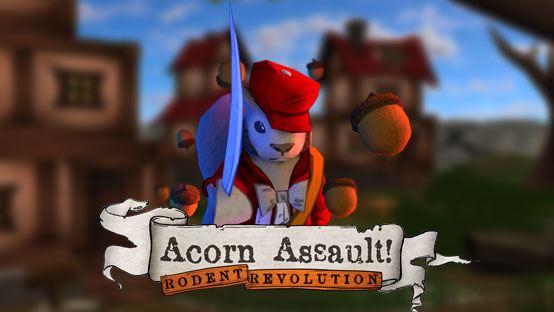 When the oppression of a community becomes too much to bear, individuals will rise up and fight in the name of freedom. Revolution is a very serious matter that has reshaped key parts of world history… although it’s slightly less serious when told through the eyes of squirrels wearing powdered wigs and fancy coats. This is the premise for Acorn Assault: Rodent Revolution, a new indie release from High Tale Studios. The comically-creative release follows the story of Charles DeMontesquirrel as he attempts to lead a revolution to free his people from the tyranny of a powerful monarchy. His heroic story line features action, adventure, suspense, and a cavalcade of realistic-looking squirrels decked out in ill-fitting historically fashionable garb.

Acorn Assault: Rodent Revolution is a 3D turn-based strategy game. It boasts some wildly-entertaining visuals, specifically on the front of character design. The graphics may not be as complex as some of the AAA releases we see each year, but they capture their own cartoonish charm. The environments are dark and eerie, as the revolution uses the cover of the night to slip past dastardly enemies. Rock walls, sandbagged outposts, and sprawling castle walls stretch into the night. If squirrels were capable of building a city to rival Paris, this is what it would look like. Much like French designers, these squirrels are pretty obsessed with fashion. Some of them sport petticoats and powdered wigs, while others boast more sophisticated attire like top hats and monocles. There is a thin layer of absurd hilarity as you watch dressed up squirrels battle one another for city supremacy, and the artists did a great job of amping up the laugh factor while still maintaining a release that offers good eye candy.

If you want to successfully topple your squirrel oppressors, you’ll need to use wit and strategy in battle. Much like a dangerous game of chess, you’ll take turns moving your squirrels into positions around a grid. Different squirrels feature different skills and attacks, as well as combat requirements. You’ll have to outsmart your opponent by placing your allotted squirrels in such a way that you overwhelm their defenses. You can even combine squirrel soldiers in real time to create powerful allies that can turn the tide of battle. If rifles aren’t getting the job done, try mixing a few units together to craft a ranged bomber squirrel that is capable of rolling large explosives great distances across the battlefield. Charles DeMontesquirrel is your main hero during the revolution, but you’ll find yourself unlocking more squirrel icons as you progress through the city.

Acorn Assault: Rodent Revolution has a robust storyline to follow, which sees you commanding an army to topple the monarchy in single-player mode. Those of you looking for multiplayer will be pleasantly surprised to find out that this indie strategy release features cross-platform online and local support. That means you can challenge your friends to a battle of squirrel superiority whenever the urge arises. Each player will pick a squirrel hero, and the game will be played just like the single-player affair, with real players replacing the A.I.