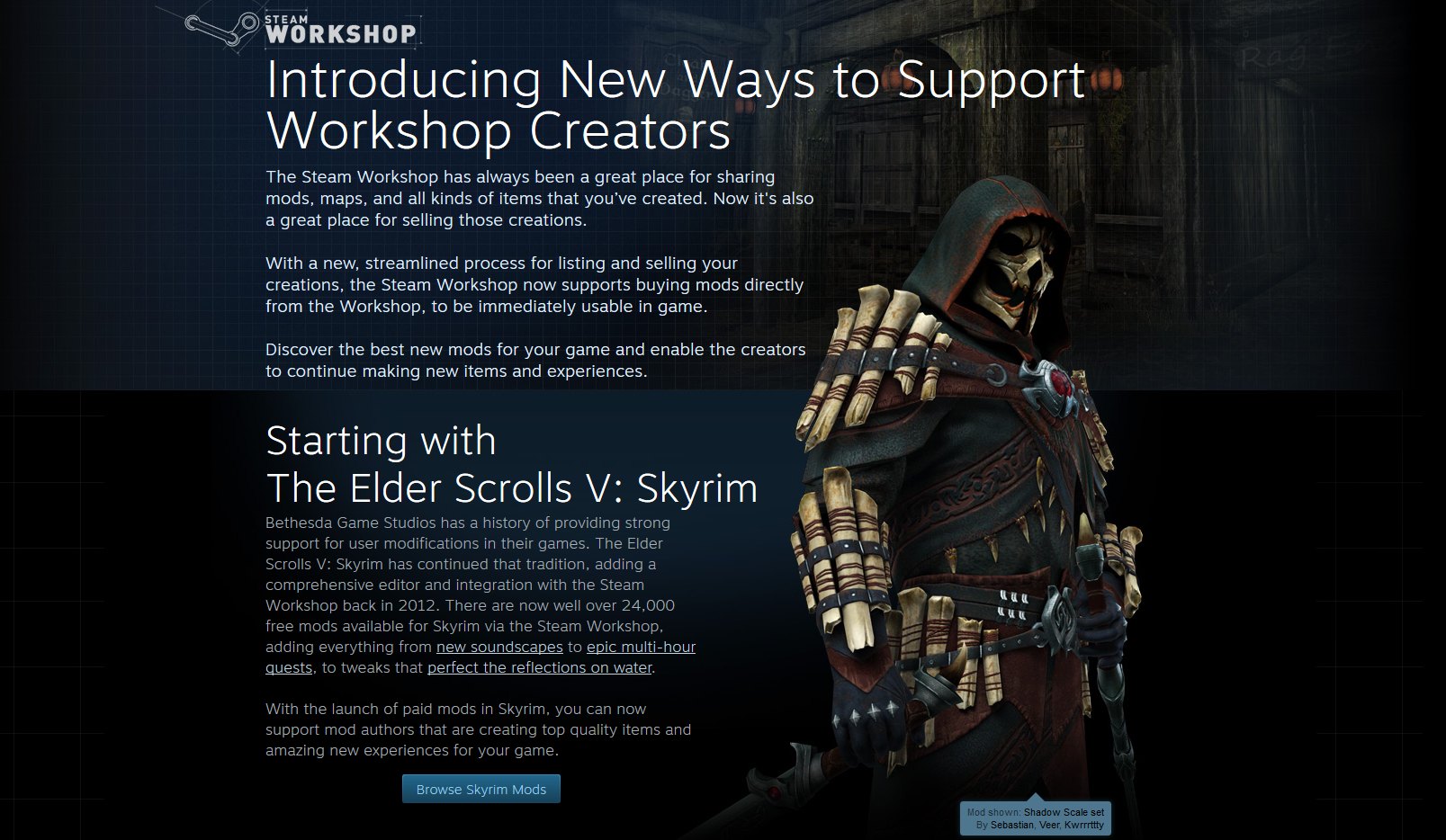 In a bold move to, ahem, “support” their community yesterday, Valve announced support for paid mods through the Steam Workshop.

The reception so far can be summarized fairly succinctly: this is an idea that is good conceptually, but merits pitchfork and torch distribution on a grand scale.

Let me set one thing straight: I don’t think Gabe Newell and his cartel of Suits are complete fools. I can only imagine this idea has gone through many iterations and been refined over time. Similarly, we’re only seeing the Day One reaction by the loudest of folks—impartial discussion is hard to find at this juncture. Still, it’s hard to discount pushback of this magnitude.

I doubt we’ll be seeing mass boycotts of the Steam service. The distribution platform has become ubiquitous in the modern age of digital gaming, Steam has essentially set the bar for any service to follow, and graces the hard drives of millions upon millions of gamers. Steam has paved the way for a number of new ways to introduce content, from major studio deals to the Steam Greenlight program for indie games, and with Early Access to support newer or smaller dev teams. Whether or not these programs are good for gaming at large, the fact is that when Steam introduces a concept, it’s bound not only to make waves, but to have a profound effect on the industry at large.

The Steam Workshop launched in October of 2011, and gave just about everyone access to the tools necessary to publish mods to popular titles in an easy searchable catalog with an established community. For many that make these mods, it’s a powerful means for those that don’t spend all their time making games to express their creative desires. You can take an established medium—a completed game—and improve upon it in a variety of ways.

Mods have long been a piece of the gamescape, the more popular ones have produced profound results— Team Fortress was originally a basic Half-Life mod, as was Counterstrike. The ever popular DotA was a Warcraft III mod that has now spawned the game with the record for the most concurrent users on Steam. The more recently popular DayZ was an ArmA mod that has renewed interest in the survival genre as a whole. Whether readily realized or not, modding has the power to take established gameplay or setting and infuse it with a very unique medium: that of the true fan.

And on the surface, Valve looks like they want to reward the passion of those fans. The people that toil away in the wee hours between work and sleep to breathe new life into the products they love. Certainly, it’s not a pursuit mired completely in generosity—plenty ask for donations to support them—the communities that surround modding are among some of the most supportive and constructive you’ll find.

And therein lies the rub. Steam took the Workshop and flipped a simple switch: one that allows modders to set a price for their work. And, as I said, this seems like a good idea on paper. It’s a general principle of business. Find a product or a space that needs a product, and fill that gap. You increase the flow of money, the economy improves, everyone wins.

And, in a perfect world free from the human element, this might be true. By and large, the modding community is likely to operate in a fairly civil and controller manner. There are those among them, though, that would exploit the work of others for their own gain. This system is one that takes a monetized product, but places a significant amount of the policing to the player base.

What’s to stop the less ethical people from copying assets from another mod (or even an existing free mod) and selling it as their own? Content mills could easily start to rapidly produce subpar content to flood the market with cheap imitations of popular work. Should you catch word that another piece plagiarizes your work, it’s on you to issue a DMCA takedown notice—something I imagine a lot of modders simply won’t have the time or the patience to do—especially considering the fairly small percentage of the profits per sale that make it to the player (something close to 25% of the listed price, according to most figures), and that doesn’t figure into the taxes you’ll need to pay on that “income”—likely subject to a self-employment tax which, in the United States, generally amounts to about 17-19%.

The hope among the vox populi would be that market forces would take hold and dictate that quality products shine through the depths, and that imitators will find their work to be largely worthless as a result. Despite all the clones of popular games we see on app stores across mobile devices, you might be surprised to hear that about 60% of apps have never been downloaded—not once. Similarly, mods of poor quality might escape wandering clicks and payments.

None of us will doubt that Steam is hoping to grab a cut of the profits to pad their accounts, but they’re also not creating a Wild West modding arena. You’ll have 24 hours to refund a mod if you find it’s not representative of its description, or if it doesn’t function with your game in its current state—this is probably the most powerful tool in the Steam modder’s arsenal, though I imagine the most clever of users will find ways to pirate these mods within that time period.

I find myself torn in the face of this system. Part of me wants to hope that the system is tuned enough and that the communities will be active enough in the information age to sort the good from the bad, and that by adding a monetary incentive, we’ll see higher quality mods begin to appear. This all seems terribly idealistic.

The other part fears that we’ll be inundated with the equivalent of shovelware. We’ll see overpriced mods that offer minor improvements at best that regularly turn out to be more work than they’re worth and are built upon shores of other mods in order to function. Worst case scenario: we see the death of the modding community at large, as all but the most dedicated of creators abandon their pursuits in a field saturated with greed. This is technically a fallacious, slippery slope-induced fear.

Time will tell, but the unrest among users is palpable, and cannot be ignored. My hope is that the general passivity of recent generations will fail here—as more and more players cry for their comrades to cease supporting more of the practices by publishers they hate: preorders and rushed releases and the like. Perhaps in this instance, even if the system proves not to be the well-oiled machine we hope it will be, the players will successfully raise enough of a proper stink (and not an emotional, rage-induced one) to really see the system changed.

Read up on the new system direct from the source here. At this time, only The Elder Scrolls V: Skyrim is supported, but more games will be along shortly, so keep a cautious eye on those mod catalogs.