Ten Months Out ‘Destiny’ Is Almost The Game We Originally Wanted

Destiny has proven itself to be a special case in the video game world.

We’ve talked about the game before, and have even found ourselves to change positions on it on occasion. It was a game that reeked of broken promises and seemingly unusual design decisions. It was once imagined as an immense space opera, a persistent world inhabited by tens of thousands of Guardians fighting against the Darkness in the hopes of salvaging a dying world. Elaborate raids, tons of loot, intriguing gunplay, the works.

What we got wasn’t quite what we expected. The vanilla launch felt like an unrealized vision, marred by its hybrid heritage. The shooting elements were fairly cookie cutter, modified only by a more RPG-like class system than your traditional FPS. Loot felt limited and the best items were far too difficult to acquire, as everything in the game was based on an RNG system.

But it was gorgeous, it was. The game oozed style from every pore, despite the fact that everyone’s characters started to look the same. The game’s story was practically non-existent, and to access any backstory you had to log onto a separate website to read up on the history of the world.

The game was quickly criticized for it’s failure to live up to Bungie’s established pedigree. Multiplayer modes felt less-then-stellar, many popular game modes in a competitive shooter were curiously absent. Despite having four alien races to fight against, they all followed relatively similar unit structures, and don’t execute particularly complicated battle tactics—instead opting to brute force their way through most situations with larger units charging down while the rank-and-file hide behind cover and pop out on occasion.

As the game grew and the first expansion dropped, the game continued to draw ire, despite its growing popularity. It was difficult to pinpoint. The game’s design was just clever enough to keep players coming back for weekly strikes and raids, and the option to grind for a little additional loot for the heavily dedicated. At the same time it wasn’t deceptive enough that people couldn’t identify the game’s faults with relative ease and levy a constant stream of criticisms related to weapon balancing, the game’s matchmaking, the design of the group activities, and a lack of real imagination in a game that still holds the record for the largest budget on a single game in history.

Much of that still stands today, but with the more recent House of Wolves expansion and the looming third major expansion The Taken King (which I got to play at E3, more on that in a moment), the game is beginning to feel at least somewhat more like the game we originally wanted it to be, albeit almost a year too late. 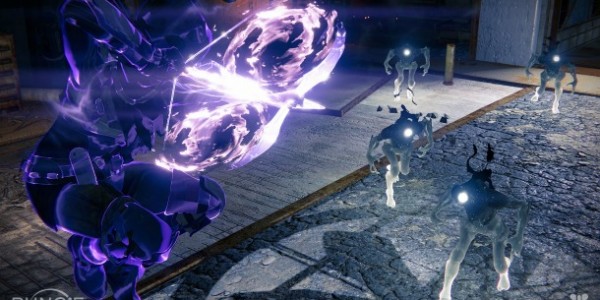 Yes, weapons still need some tuning and a little more variety—partially addressed by the new addition of the Sidearm weapon class (which is vastly underpopulated, with only two weapons bearing the moniker). The last weapon balancing patch all but crippled the auto rifle class in the game completely. Many of the same bugs that have plagued the old raids remain unchanged in the game. The new expansion didn’t offer a raid, but rather a less intensive three-man arena that felt fresh for a week or two, but still offers some crucial variety.

The game’s economy is finally starting to feel fleshed out: old materials that had been stockpiling in players’ inventories could finally be exchanged for Glimmer or converted into other useful materials. Motes of light can be used to reforge newer gear to meet your needs or tastes, and a new rare material can be used to Ascend legendary gear to the highest values possible in Year 1. Destiny‘s community crew has clearly been listening to the cries from the fans, but progress feels slow and plodding toward solutions.

However, the game feels more alive than ever. With each expansion the game’s production value goes up. Voice acting is better, the “stories” in each expansion feel more and more valid (still not there yet). The Taken King is even based specifically on past events in The Dark Below expansion (and requires the two previous expansions to play).

The next expansion looks to be the one that will really give the game the meat it should have had all along: sure we’re getting the usual batch of new equipment and a new raid, but we’re also finally getting everyone’s third subclass to add more crucial variety and make each class feel more like we felt like they should: Stromcaller Warlocks calling down powerful crowd-controlling thunderstorms, Sunbreaker Titans dealing heavy melee damage with a flaming hammer, and Hunters gaining crucial support capabilities for locking down targets and area-denial grenades.

New guns, new enemies, new classes, that’s all well and good, but I worry about the precedent that the game is setting in the game space.

It took ten months for the game to reach a point where I don’t feel like I can so easily criticize it while feeling weird for playing. I’m more proud of my three max-level characters than ever. I put in my extra time and effort and can finally say I got my last two exotic weapons to finish out my collection  (Truth and Necrochasm, for your information). I’ve built a community of friends that I run raids with or jump into a few rounds of the Prison of Elders with. We try to engage in the Trials of Osiris and chuckle to ourselves when we fail miserably.

But it’s too late, isn’t it? It’s tough to feel like the game didn’t somehow cheat me out of the months leading up to House of Wolves, despite my enjoyment of the time. It’s a strange thing to describe: the way the game is fun, but strangely soulless in execution. I look at the game from the outside and it feels like I’m doing chores. “Now Ray,” the game says, “Do your Nightfall, or you won’t get any Etheric Light this week. If you do really well, maybe I’ll give you a nice piece of exotic armor.” And I did well, but they gave me another pair of Radiant Dance Machines, not the ones I wanted.

And after all this time, I suddenly feel like I have little to play for. I’ve matured, in a weird way. I’m moving out of the basement and into my own place. But I can see what’s ahead and can’t help but be excited. The Taken King looks like it’s adding so much it might merit the exorbitant forty dollar price tag.

The problem here is that the game is doing better. It’s not there, I don’t think. There’s much to be done to make a flowing economy. Raid mechanics need to be fully fleshed out without resorting to artificial difficulty through overleveling enemies. Weapons need to be more diverse. But they’re getting there, and they’re taking all my time with them.

The thing is that now that they’re really moving toward something that feels much more complete, it feels like a lot of that power is going to their heads. The price tag on the game, as I said, is massive. And while Bungie is rewarding the Year 1 players with some special rewards (a shader, and a sparrow among them), but The Taken King took it a step further, offering three exclusive shaders, emotes, and special exotic class items in a collector’s edition of the game.

Problem is, the collector’s edition runs $80. And includes the base game and the first two expansions: it’s a complete method to get a new player up to speed with one fell swoop, but left the game’s most loyal and supportive players out in the dust. The game’s creative director Luke Smith gave a rather painful interview to Eurogamer which stoked the ire of the game’s fan base—harsh words from a studio dev that were cold and uncaring to the very people they provide entertainment to: the players.

Smith later apologized and offered an ever so slightly less awful solution: the special items can be purchased separately from The Taken King for a still-insane $20. You’re still in the hole $60, the standard retail cost for a game these days anyway, for an expansion to a game that is only reaching adolescence now, and shouldn’t have been put into the world until it was an adult.

We talk about market forces determining the outcome of companies like this all the time. Many internet communities are fostering an anti-preorder movement for gaming, hoping to prevent companies from releasing subpar products in the face of essentially guaranteed sales, usually by offering what are often silly or occasionally game-breaking exclusives for slapping a little money down early. Take the recent debacle of Batman: Arkham Knight on the PC.

Destiny may not have been completely broken upon launch, but imagine a thousand page book that didn’t even get good until a third of the way through. What if the first good Marvel Cinematic movie Winter Soldier and everything else before it was trash?

I worry because I like Destiny. I’ve played it for five hundred hours. I like the feel of many of the guns. I like being able to play a game in short bursts. High level content is fun when it’s challenging, low level content is fun to just blast through without a second thought. I love the feeling of that next drop, pushing for that next level, clinching a close PvP game, the works.

But I don’t want to support a system that thinks that I should pay $140 for the game I wanted a year beforehand. Sure, Bungie changed course in the face of community backlash, but it doesn’t feel like enough. Like Microsoft at last year’s E3, I kind of feel like the damage was done, no matter how much ass Bungie tries to kiss.

And I hate that abusive developer/publisher to player relationship. Despite an increasingly aware and connected gaming community, they constantly think that we’ll settle for less. For broken promises and products. For games that don’t meet the expectations of the gamer. We get burned over and over again, but keep coming back for more. E3 this year featured so many huge titles, it’s hard not to feel like there will just be corners cut as all these projects try to edge out the competition and end up releasing yet another broken mess. One that we’ll pay for every six months for another several years.

So consider your option carefully if you’re thinking of picking up The Taken King. Or any other AAA project coming up. Your money is valuable. Use it wisely.

Oh, and in case you missed it, Bungie even started a cross promotion with Red Bull, allowing players so inclined to drink specially marked cans in order to net a brief but sizable boost to your experience gains. While this has been met with some rather comical responses from other companies, and more than enough angry tweets and the like. To be honest, I don’t mind it too much—a little cross-promotion is good in businesses like mine, it’s just weird to see it so flagrantly displayed. It’s not like there’ll be Red Bull logos floating by in the Tower, so I think people should just tone it down a little bit.