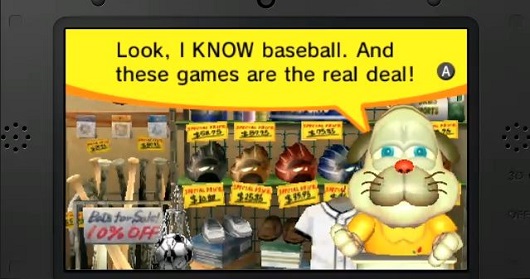 It was only a matter of time before the gaming industry positioned new revenue models as a standard. With the rising popularity of mobile connectivity and its public declarations of play spurring competitiveness amongst users (my heart goes out to The Simpsons: Tapped Out addicts), it seems new revenue streams like microtransactions and downloadable content are the new norm with games designed around monetization. But as Motley Fool reports, companies, like Nintendo, are still testing the waters on guiding players to pay, much to the chagrin of fans, and investors. 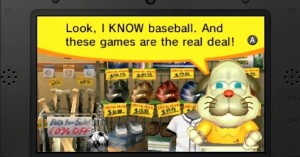 During Nintendo’s latest investor conference on mobile development, its president Satoru Iwata presented a new 3DS game called Rusty’s Real Deal Baseball, featuring a free mode where users play as a batter, or upgrade to pay-to-play modes granting access as an umpire or catcher. The clincher? Players can haggle.

That’s right, Rusty can significantly lower the fixed price of $4 if players are willing to work toward a better deal by offering him in-game items. What’s more, the time required to barter with Rusty is expected to leave players feeling nostalgic for the relentless questioning of Clippy the paperclip, and more importantly, encourage flat rate purchases to move forward in the game.

It’s a bold move for Nintendo, who’s already in the green with 3DS titles increasing 45% year-over-year to 16 million – and just in January, U.S. sales rose 6% year-over-year. As tech author Leo Sun writes, “Whereas gamers could previously pay $40 and enjoy a full experience, they are now forced to wait to restore ‘energy’ simply so the developer can ask them if they want to pay for a quick refill.”

But the system is working.

Gone are the days of managing your finances to afford bike upgrades in Road Rash. Now dollars spent are reflected in players’ real wallets. As confirmed this week by Take-Two Interactive, GTA Online has made over $66 million in additional gross revenue from post-retail microtransactions – in just four months. Built to encourage players to pay, GTA Online offered a virtual economy where players could earn a pittance in cash rewards from completing missions, or exchange real-life currency for virtual cash affording them high-end properties, weapons, and even car insurance.

Though Nintendo’s top-selling games on 3DS– Pokemon X/Y, Super Mario 3D Land, and Mario Kart 7 – come free of in-game transactions, it’s clear that investors want the company to replicate GTA’s success. And that criticism aimed towards the new barter system in Rusty’s Real Deal Baseball? Well, Stockholder Kenneth Wagner put the investors’ intentions in perspective, stating, “The point of free-to-play games is to get the people who like them to spend thousands of dollars. You don’t make the game cheaper for them – that’s just throwing away money.”