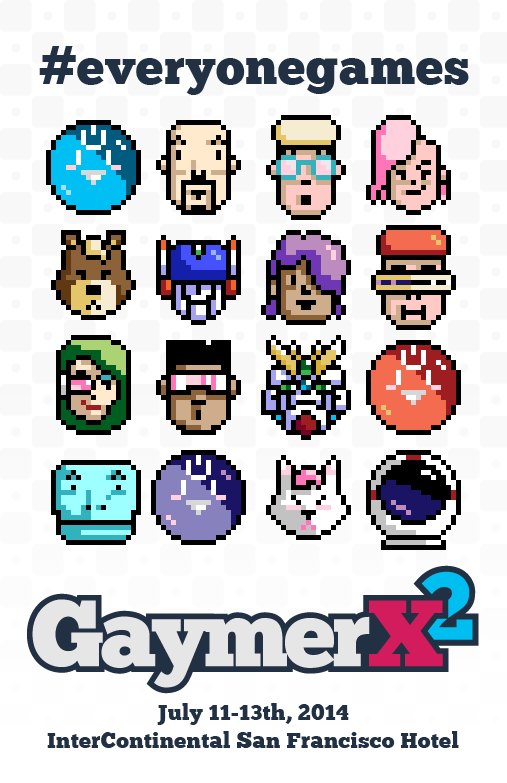 Like all things that combine anonymity with an audience, gaming is also subject to its terrible share of discriminatory opinions. This makes it noticeably more difficult for gamers who identify as part of the LGBTQ community to partake in activities like online play, where that anonymity makes for, to put it lightly, an unpleasant experience. That’s why it’s nice to see something like GaymerX thrive.

Last year saw the successful crowdfunding of the first fan-facing, LGBTQ-oriented convention dedicated to providing a safe and enjoyable gathering for folk of varying sexual orientations. The first event took place in early August, garnering both positive feedback and an incredible turnout. With over 2,300 attendees making the journey to San Francisco in its inaugural year, the convention organizers are naturally looking to expand the event’s scope for its anticipated next iteration.

The founders are once again turning to Kickstarter. The purpose of the campaign is to aid in providing the necessary $10K deposit for the convention’s new location at the San Francisco InterContinental hotel, which will provide 40K sq ft of convention space. For reference, as a comparison of the event’s anticipated year-to-year growth, the new venue will offer three times the allotted space of the first convention. (Last year, it took place at the beautiful Hotel Kabuki & Hotel Tomo.)

GamerX isn’t about separation or fragmentation of the gaming community, but inclusion. While it may have a focus on LGBTQ issues, it’s an additive experience that’s meant for everyone to enjoy. (Isn’t that the point of video games in the first place?) Notably, one of the convention’s premiere celebrity guests so far is Fred Rosser, perhaps more famously known as the WWE’s first openly gay superstar wrestler, Darren Young.

One of the several industry guests is David Gaider, lead writer of the Dragon Age series, itself a video game franchise that features no set sexual orientation for the player character, offering a refreshing variety of romantic options (though still limited). Other noteworthy guests include Alexis Ohanian, co-founder of social news site reddit; Zach Weiner, the author and illustrator of the Saturday Morning Breakfast Cereal webcomic; and video game and film composer, Jake Kaufman, who has worked on dozens of games like Red Faction: Guerilla, Adventure Time: Hey Ice King! Why’d You Steal Our Garbage?!, and the upcoming Shantae and the Pirate’s Curse.

Last year’s crowdfunded campaign managed to accrue a cool $90K, which was well above its initial $25K goal. This year’s iteration has already seen its campaign successfully funded within a single day and the organizers plan to announce more exciting convention-related news. Also, with about 32 days left to donate, surpassing multiple stretch goals should be expected.

If there’s any justice in the world, at least the $40K stretch goal will be reached. August’s convention saw voice actors Ellen McLain (GLaDOS from Portal) and John Patrick Lowrie (Sniper from Team Fortress 2) help a Portal fan propose to his boyfriend during the “Voice Acting 101” panel. McLain even sang a heartfelt version of the game’s “Still Alive” ending song with reworked lyrics:

This year’s event will see the wedding of Koen and Chris, but reaching that stretch goal will provide what’s called the “Super Portal Wedding,” which will have McLain and Lowrie return to attend the wedding and “have some secrets up their sleeve.” Further, they’ll also be on hand to host a sequel panel, “Voice Acting 102,” and will also accommodate some autograph signings.

If the campaign reaches $150K, everyone who donated at least $50 will also receive a copy of Read Only Memories, an upcoming cyberpunk adventure game. The game, which was also successfully crowdfunded last December, is being developed by MidBoss, the studio founded by the GaymerX team. The developers hope to have a demo of the game, if not the full product, playable at the convention.

It should be noted that the convention is limited to attendees aged 18 years or older, due to “legal issues dealing with insurance.” In spite of this, the organizers stress that the event is not NSFW. After all, the event’s admirable purpose is to celebrate both the diversity and inclusivity in gaming and geek culture, so there should be something for everyone. And if there isn’t, you can always propose to host a panel.

Badges start at $70, though you can purchase one for $59 via Kickstarter now or donate a badge for $50. The convention is set to take place July 11th-13th, 2014, in downtown San Francisco.