Hey Gamers: Stop Being “That” Guy

As a female gamer, it’s unfortunately inevitable that on any given day, I’ll be met with a barrage of comments regarding my gender. Typically, they either think I’m a prepubescent boy or an overweight mouth-breather that can’t possibly be attractive because I like to play video games. The harassment escalates if I defeat them and wipe the smug smiles of their faces: “Go f**k yourself, you cheater. There’s no way you’re that good. You must be using a lag switch. Go back to the kitchen and make me a sandwich, you poser b**ch.” You mad, bro? Well, apparently you are either illiterate or can’t do preschool-level math, because I just mopped the floor with you.  Don’t be upset because another gamer simply has a better skill set this match; we all  have good and bad matches, and it’s completely irrelevant that I happen to be female. *Disclaimer: Harassment can happen to anyone and everyone regardless of gender. I’m merely detailing events I and others I know have experienced. We just so happen to be female. 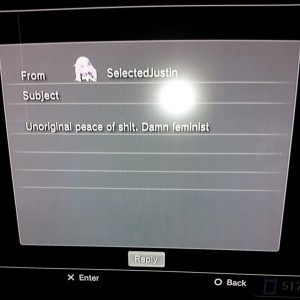 Well, your grammar and spelling are certainly beyond stellar there, champ.

I’ve got to be honest, I sat on this article for a while pondering on whether I should even write it; I was concerned with the comments I will surely get complaining that it’s a feminist piece and that I’m simply whining or seeking attention—and that right there is a serious problem in itself.  I shouldn’t be concerned about speaking out about how myself and others are being treated, but alas, I am. I don’t want to be labeled as “that” woman, the one that spoils all the fun and ends up isolated because she’s outspoken. Just because I don’t want to take someone’s total chauvinism doesn’t mean I’m an ice queen doling out wet blankets, hellbent on censorship (trust me, my vocabulary rivals Samuel L. Jackson’s). I simply want the gender-bias toned down a notch. Even female game developers like  Zoe Quinn are getting harassed and bombarded with threats and unbridled idiocy.

Recently, I was discussing this very topic with some gamer friends of mine and two of the female gamers agreed that they tend to leave their mics muted in lobbies and when entering unfamiliar matches because they feel that  the harassment is unavoidable. Some have even gone to further extremes by having separate accounts for multiplayer gaming with gender-neutral gamertags and even use voice changers on their mics. I typically play with at least one or two other friends, but when I’m alone I sometimes find myself apprehensive about speaking in lobbies until the match actually starts. I logged into play games and have some friendly competition, not to discuss who banged whose mom or how I’m going to get raped. Don’t even get me started on the time I overheard some complete cretin bragging about how he heard a girl getting raped at a party by his friend and he “went and grabbed another beer and let it happen. Man, she totally deserved it.” Whoa. Wait, did I just hear you admit to being possibly the worst human being on the planet and laugh about it? My faith in humanity has certainly taken a few hits.

It would be so easy to sit back and shake my head sadly, ignoring the so-called trolls and bullies, but where is that going to get anybody? I’m a firm believer that when we stay quiet and take the abuse, it’s a green light for it to continue and propagate. They want us to shut our mouths and slink away quietly so they are free to spew their vile nonsense without consequence. If someone else is getting bombarded with insults and being bullied, speak up and defend them if they are too afraid to speak for themselves. I do my best to avoid stooping to their level by returning fire—which is probably one of the most difficult challenges of self-control ever—but I also don’t keep my mouth shut and let it continue. Most of the time I calmly remind them that it’s just a game and we’re all here to blow off some steam; there is no need to be violently angry and as immature as possible. When all avenues of common sense and basic human decency have failed, I just mute the entire lobby to save my sanity. What was that golden rule Thumper from Bambi taught us? Oh yeah: 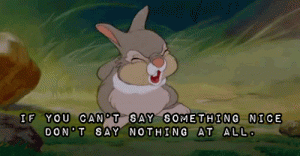 Who knew that a rabbit had more common sense than some gamers?

Often times outside of the gaming environment, I hear guys saying how cool it is that I and other girls play games and how they wish they could find a chick as cool as us. Newsflash, guys: we aren’t unicorns! We are everywhere and we’ve always existed, social media and the internet has just made us more visible and accessible. We aren’t doing it for the attention or to ninja our way into your beds, we just love to play video games like anyone else. I understand that the competitive nature of gaming tends to turn people into jerks against one another, but always remember: it’s just a game with virtual scores and points. As Jenova Chen, director of Journey says: “[Listen]: none of us was born to be an a**hole. I believe that very often it’s not really the player that’s an a**hole. If you spend every day killing one another how are you going to be a nice guy? All console games are about killing each other, or killing one another together. Don’t you see? It’s our games that make us a**holes.”

Dude-bros: get over yourselves. Gamers come in all shapes, sizes, walks of life, and *gasp* genders. Stop complaining that females are “ruining gaming” simply because we’re tired of it and our voices are being heard. This isn’t kindergarten where you show affection by pinching the girl you like. We aren’t impressed with your Gaston-esque demeanor. You can have your cake and eat it, too.